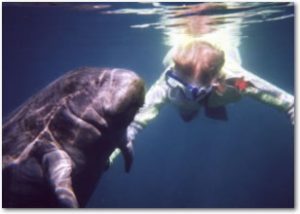 Every year an estimated 100,000 tourists participate in manatee swim-with programs that promote direct encounters in manatee lagoons. Studies indicate that approximately half of these human-manatee interactions constitute harassment, with tourists routinely observed poking, chasing, standing on or kicking manatees, as well as separating mothers from calves.

The U.S. Fish & Wildlife Service (FWS) actually licenses the swim-with program with special use permits that it issues to local operators in the Crystal River area, north of Clearwater. Despite news stories, videos and other reports, FWS has not revoked permits or taken more than token action to curb abuses, such as 

FWS has taken the attitude that because no manatee has yet been killed by a swimmer, no agency action is required. As a consequence, the manatee is the only endangered species that is treated like it belongs in a petting zoo.