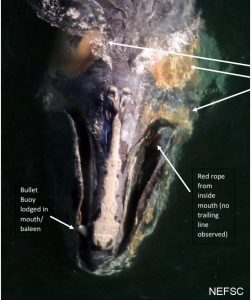 Right whale with fishing buoy lodged in her mouth. Animal is now presumed dead from starvation.

President Trump just announced that he was rescinding protections in the Northeast Canyons and Seamounts National Marine Monument off the New England coast, one of only five Marine Monuments in the country. The 5,000 square mile area east of Cape Cod was closed to commercial fishing when it was designated by the Obama administration.

The Monument is used by the endangered right whale, a species that has been decimated by entanglements in fishing gear. Right whales already have to navigate roughly 900,000 vertical lines in the water during peak lobster fishing, and re-opening the Monument would increase the risk of even more entanglements.

Stripping protections from this critical conservation area is one more attempt by Trump to deny science, pillage our public lands and waters, and line the pockets of private industries.