COMMENTARY | Deep-Sea Mining for Metals: Treading Carefully on the Path Toward Renewables

Deep-Sea Mining for Metals: Treading Carefully on the Path Toward Renewables

As the push for renewable energy sources continues as a means to combat climate change, the demand for metals and minerals that make up critical components of clean energy technology will be on the rise. While some of these minerals can be obtained via deep-sea mining, the environmental impacts of such efforts are not well understood. In moving to a clean energy economy, governments and international non-governmental organizations need to research, understand, and mitigate the negative impacts to the environment and communities that can and will result from activities like deep-sea mining before allowing projects to go forward. 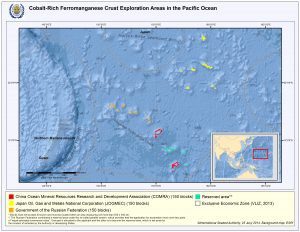 Map of the Western Pacific showing the locations of Manganese crust exploratory sites granted by the ISA. Image: ISA

Whether deep-sea mining is necessary to acquire enough minerals to fuel the renewable energy shift remains an unanswered question. In a May 2021 report on the need for minerals to power energy transition technologies, the International Energy Agency predicted that by 2040, total mineral demand for clean energy will be four times current demand. Electric vehicles and battery storage technology account for about half of this predicted growth in mineral demand. The Institute for Sustainable Futures at the University of Technology Sydney indicated in 2016 that this increased demand for materials can be satisfied without utilizing deep-sea mining even under a target of 100% renewable energy use by 2050. Further, Carbon Brief reported in 2018 that reserves of lithium and cobalt are likely to be sufficient to meet demand, but there are outstanding concerns of supply chain bottleneck causing delays. This is supported by the IEA report, which indicated that problems in supply of minerals is more likely to be a matter of quality rather than quantity. However, a 2018 study supported by the Dutch Ministry of Infrastructure found that the current supply of critical metals is not enough to transition to a fully-renewable energy system in the Netherlands. Additionally, a 2019 projection of demand for cobalt, lithium, and silver looking as far as 2050 found that “reserves” of these materials—a portion of total available resources that can be extracted economically—will not be sufficient to meet demand for cobalt, and demand for lithium can only be met in a “potential recycling scenario” with improved recycling rates over what is being conducted at present.

However, deep-sea mining comes with its own set of environmental concerns. The possible impacts of sediment plumes from mining operations on benthic ecosystems and filter-feeding organisms are not well understood, but there is a risk that such plumes could introduce heavy metals into the food chain. Mining operations could also destroy organisms that rely on mineral deposits and hydrothermal vents before the creatures are well studied—or even discovered. Further, areas that are the current focus of exploratory efforts—especially the Clarion-Clipperton Zone in the Pacific, the site of over half of current exploratory licenses—contain a diversity of organisms that rely both directly and indirectly on the polymetallic nodules being investigated for mining operations. Destruction of these organisms could have implications for climate change, as recent studies indicate benthic bacteria sequester 200 million tons of carbon dioxide annually. Mining operations could impact the ocean ecosystem more broadly, as noise pollution could disrupt communication among whales and other cetaceans. 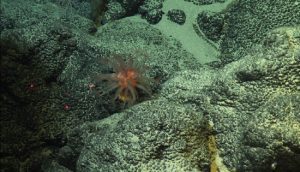 Both the United Nations and the United States regulate deep-sea mining operations. The International Seabed Authority (ISA), created under the UN Convention of the Law of the Sea (UNCLOS), regulates all mineral-related activities in the international seabed. For a company to begin exploration of deep-sea mineral deposits for possible extraction, they must obtain an exploratory license from the ISA. As of April 2021, the ISA had issued 31 licenses for exploratory missions with 22 different contractors. An August 2020 report commissioned by the International Seabed Authority indicates deep-sea mining will likely begin by 2027. However, the International Energy Agency reported that Japan, Norway, and Papua New Guinea have ongoing exploration projects in their national waters, and that Norway expects to issue licenses for deep-sea mining as early as 2023. Papua New Guinea issued a permit for deep-sea mining in its national waters for a project that was slated to begin in 2020, but the project failed, leading several Pacific Island nations to call for a moratorium on deep-sea mining until more complete research can be conducted on its environmental impacts and economic feasibility.

In the United States, the National Oceanic and Atmospheric Administration (NOAA) regulates deep-sea mining under the Deep Seabed Hard Mineral Resources Act (DSHMRA). The DSHMRA was originally passed in 1980 and was intended to provide an interim legal regime for deep seabed mining operations pending the adoption and ratification of the UN Convention of the Law of the Sea, though the US has not since adopted UNCLOS. No deep seabed mining is currently being conducted around the United States, but at least four licenses have been issued for exploration in the south Pacific Ocean.

The renewable energy transition is on the horizon. As the Biden administration works to rebuild the domestic supply chain for rare earth metals and shift toward renewable energy, they must carefully consider the environmental and community impacts of deep-sea mining and be in closer conversation with the global community about regulating exploratory and extraction projects to minimize and mitigate those impacts. This can and should include funding studies of the impacts of deep-sea mining on ocean ecosystems and a serious consideration of joining the UN Convention of the Law of the Sea.

Katherine Wilkin is a Legal Intern at PEER and a law student at Columbia University.