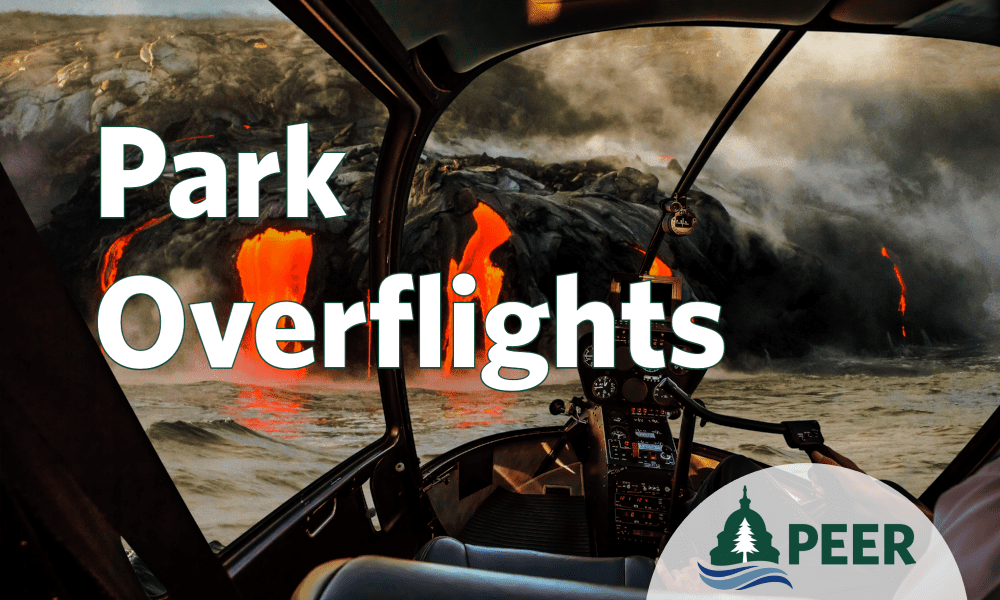 It took a court order to end decades of foot-dragging against reining in the thousands of noisy tourist overflights buzzing across national parks. Now, the first two National Park Air Tour Management Plans have been finalized but a score more parks will miss a court-ordered deadline altogether and many of those will be incomplete, lacking legally required environmental reviews.

In 2020, PEER won a court judgment requiring the Federal Aviation Administration (FAA) and the National Park Service (NPS) to finally implement the National Park Air Tour Management Act of 2000, which requires regulation of park overflights to minimize noise and disruption in any park with more than 50 overflights a year. Despite this clear mandate, not a single such plan had been completed in the more than 20 years the law had been on the books.

“While we are glad the agencies are at long last starting to do their jobs of curbing noisy and disruptive park air traffic, the quality and integrity of those plans leave a lot to be desired,” stated PEER General Counsel Paula Dinerstein, noting that most all the official noise and other studies upon which several plans are based have not been available for public scrutiny. “These agencies still do not seem to grasp that the law commands environmental review and public involvement at the earliest stage of planning and through its entire course, not waiting until after the final decision has been made. Our aim is to curb abuse, we are not trying to ground all overflights in every park,” added Dinerstein, pointing to a park like Hawai’i Volcanoes which suffers a noisy helicopter tour every 8 minutes from dawn to dusk.”

September 29, 2022
The path to serenity in the skies above all national parks is no longer subject to the demands of commercial ...
Read More

Promised Crackdown On Park Overflights Yet To Take Off