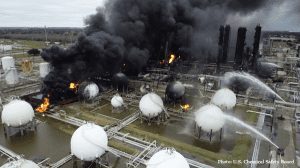 The U.S. Chemical Safety Board is an independent federal agency charged with investigating industrial chemical accidents. Headquartered in Washington, DC, the agency’s board members are appointed by the President and confirmed by the Senate.

The CSB’s mission is to “drive chemical safety change through independent investigation to protect people and the environment.” Sadly, the CSB is failing in its mission. Wrought by cratering morale, personnel issues, industry influence and weak regulations.

Lax chemical safety monitoring and reporting could result in serious mass casualty events. Massive refinery explosions are a textbook example of dangerous chemicals mixing with lack of oversight and a profits-over-safety approach to management. Politicians and regulatory agencies, however, are blocking critical steps to prevent future plant explosions and to hide the chemical content of plumes that coat communities after explosions. PEER is pushing the Environmental Protection Agency (EPA) to ban the use of Hydrogen Fluoride (HF), a highly volatile and deadly chemical used at many refineries, we are fighting for the implementation of laws that let communities, firefighters and first responders know what chemicals are released into their communities as the result of fires, explosions and releases.

PEERMail | Getting a Grip on Toxic Chemicals

May 2, 2022
As thousands of communities throughout the country find their water and food contaminated on with PFAS, the ...
Read More

EPA Sued Over Failure to Explain Its Narrow PFAS Definition

March 28, 2022
Just one communications network using the technology could result in hundreds of metric tons of mercury releases ...
Read More

March 16, 2022
EPA staff are under pressure, and often retaliated against, to remove chemical hazard information and to keep ...
Read More

September 27, 2021
Second in a series of webinars that examines how risk assessments for new chemicals have been improperly altered ...
Read More

August 10, 2021
DESCRIPTION: Letter to Dr. Michal Freedhoff regarding the hardships in the New Chemicals Division at the EPA TO: ...
Read More

July 30, 2021
On Whistleblower Appreciation Day, we honor those who stand up for strong environmental protections and work for ...
Read More

Chemical Safety Board Chair’s Spending Spree – On Herself

February 19, 2020
After more than 20 years of delay and a successful lawsuit by PEER and chemical safety advocacy groups, the ...
Read More

PEERMail: Exploding in a Neighborhood Near You

PEERMail: David Bernhardt and the Banality of Evil

February 13, 2019
As disturbing Trump appointees go, Scott Pruitt at EPA is hard to top.  Well, somebody else who has that potential ...
Read More

Morale Cratering at Chemical Safety Board

November 1, 2018
Number of Investigators Down by More Than Half as More Employees Depart
Read More

Morale Charades at Chemical Safety Board

New Transparency Is Opaque at Chemical Safety Board

Obama Retreats From His Own Chemical Safety Measures

Why U.S. Is Not Embracing Inherently Safer Chemical Plants

October 24, 2011
U.S. EPA Will Not Release Hazardous Ratings for Pompton Lakes and Other Sites
Read More