Ever since 1995, PEER has maintained the nations only database on violence against resource employees. The trend toward violence continues to grow with rank-and-file resource employees, those professionals in the field who are charged with implementing regulations and enforcing environmental laws, bearing the brunt. Across the country, those charged with protecting our environment are the victims of harassment, threats, intimidation, beatings, shootings and bombings.

Besides documenting incidents and calling attention to the problem, PEER helps targeted public servants fight back by filing lawsuits against harassers and pushing for policies that protect the safety of government workers. 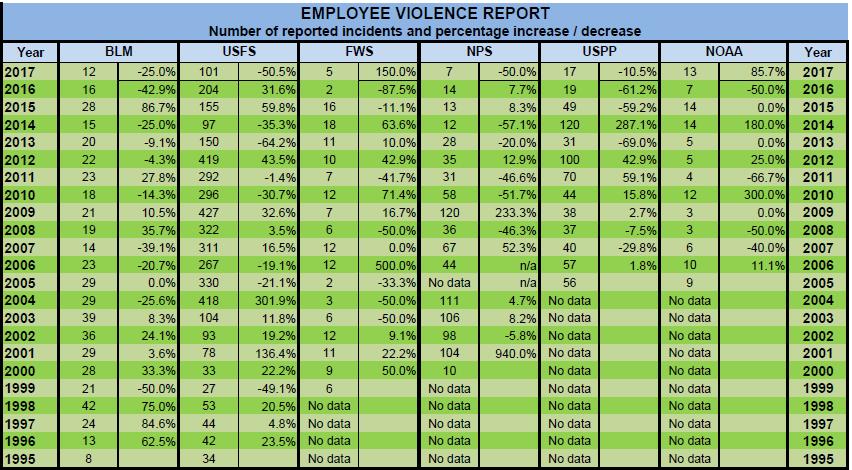 A Slice of Life in Public Service

Enacted by Congress in the wake of the Oklahoma City bombing, the 1996 Anti-Terrorism Act directed the Attorney General to collect data relating to crimes and incidents of threats of violence and acts of violence against government employees and their families in the performance of official duties. It was a law that was never implemented.

Citing the expense and impracticality of the law, the Justice Department immediately began lobbying for its repeal. Among other objections, Justice insisted that the law could not be implemented because it required subjective judgment from the FBI in identifying bona fide threats.

In 2002, Justice succeeded in securing a Repeal of Compilation of Statistics Relating to Intimidation of Government Employees. So in addition to abandoning its requirement to track threats, Justice does not keep statistics on bombings, arson, shootings and other crimes against public employees.

By contrast to its stance on public employees, the Department of Justice regards eco-terrorism as a top domestic security threat and prepares elaborate and detailed annual reports. If you ask public employees to rank the problems they must confront daily, eco-terrorism would not even make the chart. Despite the attention paid to the handful of eco-terrorism incidents, their number and impact are dwarfed by the volume and violence directed by Wise Use and resource-user groups against public employees and facilities.

VIOLENCE AGAINST EMPLOYEES – NEWS FROM PEER

November 15, 2021
Park Service employees deserve work environments that are respectful, inclusive, and safe. Their voices should be heard.
Read More

September 6, 2019
While working at BLM and NPS, Ed witnessed widespread agency indifference to the violence against land management ...
Read More

June 6, 2019
Summary Report of The Voices Project, 2019, which encouraged National Park Service employees to speak out about ...
Read More

Drop in Reported Violence vs. Federal Employees in the West

On Sex Harassment National Park Service Still Doesn’t Get It

May 11, 2017
Assaults and Threats against Forest Workers Spike but Decline in Other Agencies
Read More

Attacks Against Federal Range and Forest Workers on Rise

May 24, 2016
2015 Saw Spike in Reported Threats and Interference on Federal Lands in West
Read More

National Park Rangers Under The Gun

Extremist Anti-Government Militias on the Rise

July 29, 2013
Plan to Address Growing Risks to Both Rangers and Visitors
Read More

Spike in Attacks on Rangers and Federal Land Managers

May 27, 2010
Incidents More than Triple in National Parks, Forest Violence Up a Third in 2009
Read More

ATTACKS ON FISHING OBSERVERS RISE BY ALMOST HALF IN 2006

October 12, 2006
Joint Complaint of Tribe Trying to Drive Off Staff in Order to Take Over Their Jobs
Read More

U.S. PARK POLICE AT LOWEST LEVEL IN MORE THAN A DECADE

ATTACKS ON FOREST SERVICE STAFF UP FIVEFOLD IN 2005

ATTACKS ON FEDERAL FOREST, FISH AND RANGE WORKERS ON RISE

ATTACKS ON FOREST SERVICE AND BLM WORKERS FALL BY HALF