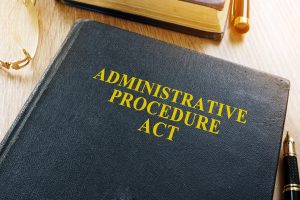 The Administrative Procedure Act (APA) is the foundational statute for the modern administrative state. Every agency that issues regulations, enforces statutes, and otherwise governs the United States is subject to its terms. The APA does many things, but most importantly it sets the standards by which an agency’s actions can be considered lawful or not. PEER uses the APA’s enforcement provisions, 5 U.S.C. § 706, to challenge agency actions and regulations that violate the law, or render arbitrary and capricious judgments about regulation or enforcement. Wherever a federal agency oversteps its powers, deregulates industry to allow it to harm people or the environment, or otherwise makes decisions that jeopardize public or environmental health, PEER brings litigation that challenges those actions as unlawful before the courts.

The APA also guarantees the people the right to make public comments on new proposed regulations to ensure that the thoughts of the people are incorporated in the regulatory process. PEER regularly makes such comments on regulations that will harm the environment or the public’s ability to oversee the work of its government.