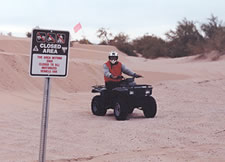 Off-road vehicle abuse is a growing problem on our public lands. On any given day, there are reckless riders tearing up fragile lands and streams and creating chaos.

Reckless off-roading is creating a backlash among many public land users, including those who enjoy viewing wildlife, conducting archaeological research, hiking, camping and hunting. Besides causing extensive damage to natural and cultural resources, off-road vehicles are becoming an increasingly severe public safety and law enforcement problem, and taxpayers will be stuck with the bill to clean up their mess.

PEER has worked to draw attention to the growing threat posed by off-road vehicle misuse and to assist overmatched state and federal land managers.

America needs a strategy to cope with the burgeoning safety and eco havoc wreaked by an explosion in off-road vehicle use and abuse on our public lands. PEER and Rangers for Responsible Recreation propose that we begin with three simple steps:

“Water and Brimstone” is short film by Genuine Human Productions and a work in progress. Environmental scientist Barry Sulkin begins to study the impact of recreational ATV activity on the rivers and creeks that feed into the Big South Fork of the Cumberland River, a protected national treasure. Unregulated and unrelenting ATV traffic is also destroying adjacent Scott County land that has been in the Morrow family for generations. This short is intended to be the catalyst for increased awareness and control of this activity on our natural areas. Learn More>>

September 6, 2019
While working at BLM and NPS, Ed witnessed widespread agency indifference to the violence against land management ...
Read More

March 1, 2019
Environmental scientist Barry Sulkin begins to study the impact of recreational ATV activity on the rivers and ...
Read More

New Nevada Monument to Be Rutted by Off-Road Desert Race

May 5, 2015
The Center for Biological Diversity, PEER and Inyo County today settled a lawsuit on the so-called “Adventure ...
Read More

October 2, 2012
More than a dozen of our countrys most seasoned law enforcement and resource management specialists from every ...
Read More

Forest Off-Road Vehicle Plans at Crossroads in the Southwest

Off-Roading Ends Until California Park Cleans up Its Act

We Have Met the Enemy…and He Is Us

Off-Roaders Booted From Arizona Monument Due to Abuses

May 3, 2007
SAN FRANCISCO— The Bush administration today refused to extend the protections of the Endangered Species Act to ...
Read More

May 23, 2003
BLM's Final Plan is Even Worse than Bad Draft; Conservationists Will Sue
Read More

CONSERVATIONISTS TAKE TO THE SAND IN DUNES DEFENSE MISSION