Waters of the United States

For years, big polluters have been trying to weaken the Clean Water Act. Under the Trump Administration, they got their way. 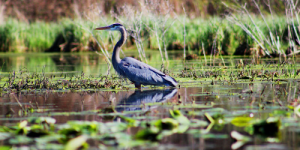 Every previous modern president of both parties has extolled the importance of protecting wetlands. By contrast, Trump denigrated the policies of his predecessors, claiming they protect puddles and ditches, even though both are explicitly excluded from WOTUS.

In addition to suing the EPA, PEER has filed a Scientific Integrity complaint against EPA senior officials for excluding both key scientific information and the analysis of its own experts​ in writing this rule. The complaint summarizes the accounts of current EPA employees and is co-signed by 44 former and current federal employees, including three former regional administrators, as well as experts from the Army Corps of Engineers and the U.S. Fish & Wildlife Service. ​The complaint has not yet been acted upon by the Biden administration.

​We will work around the clock to press the Biden administration to stand strong against big polluters and make sure our waterways have the protections they need.

January 5, 2023
The new regulations repeal a Trump-era rule, called the “Dirty Water Rule” by many, that left millions of acres of ...
Read More

February 10, 2022
PEER continues to work to compel Exelon Corp., owners of the Conowingo Dam, to clean it up and mitigate the ...
Read More

January 7, 2022
DESCRIPTION: Letter to MPCA regarding the impaired waters list, to consider expanding the type and levels of PFAS ...
Read More

September 4, 2020
Kyla Bennett testified in front of the Colorado Oil and Gas Commission to require a robust analysis of the impacts ...
Read More

May 12, 2020
One Federal Agency Lauds Wetlands as Another Seeks Their Destruction
Read More

May 1, 2020
PEER joined 13 conservation groups in filing a lawsuit in federal court against the administration’s effort to ...
Read More

PEERMail: The Worst One Yet

January 30, 2020
Of the estimated 95 Trump environmental rollbacks, one of the most dangerous is the aim to gut the Clean Water ...
Read More

January 6, 2020
A working group of the EPA's Scientific Advisory Board blasts the Administration's efforts to drastically scale ...
Read More

November 18, 2019
Impact of proposed Waters of the U.S. (WOTUS) redefinition on wetlands and waters in New York: a case study
Read More

Massachusetts Issues Permit for PFAS It Is Fighting

Arid New Mexico To Get Much Drier Under Trump Plan

August 1, 2019
Impact of Proposed Waters of the U.S. (WOTUS) Redefinition on Wetlands and Waters in New Mexico
Read More

July 16, 2019
As two PEER staffers, we are here to let you know some of the water issues we are working on and why we are ...
Read More

March 5, 2019
Army to Give Both Immediate Relief and Long-Term Treatment for Hard-Hit Town
Read More

Waters of the United States: History

January 1, 2019
WOTUS History The federal Clean Water Act  (CWA) was passed in 1972 in order to eliminate discharges of ...
Read More

December 10, 2018
Most Waters and Wetlands Would Lose Legal Protections against Pollution and Fill
Read More

Drinking Water for Third of U.S. in Legal Tug-Of-War

August 17, 2018
More Than Half of U.S. Rivers and Two-Thirds of Lakes and Reservoirs Impaired
Read More

Heather Wylie: Kayaking to Save the L.A. River

March 8, 2018
Heather took part in a demonstration to protect the L.A. River, and footage of her kayaking to prove its ...
Read More

February 28, 2018
An anthropologist in the University of Michigan-Dearborn's Department of Behavioral Sciences, Brian works as an ...
Read More

January 15, 2013
Legislation Would Limit Science That Could Be Used for Risk Assessments
Read More

Most U.S. Waters Are Polluted and Getting Dirtier