Impact of Proposed Waters of the U.S. (WOTUS) Redefinition on Wetlands and Waters in New Mexico

There are five major ecological zones in New Mexico: desert, alpine, scrub, plains/mesa, and riparian. New Mexico is arid, with an average annual precipitation of fewer than 20 inches, and its capital, Santa Fe, has an average annual precipitation of 14.21 inches. Riparian habitats are critical to New Mexico’s fish and wildlife, and for drinking water and irrigation. Eighty percent of New Mexico’s vertebrates depend on riparian habitat for migration, food, water, and cover, and 70% of the state’s birds rely on riparian habitats for feeding, breeding, or migration.  New Mexico rivers also irrigate crops, provide clean drinking water, and create the basis of a $9.9 billion outdoor recreation economy. An estimated 93% of New Mexico’s streams and rivers are ephemeral or intermittent. According to the U.S. Environmental Protection Agency (U.S. EPA), climate change has already resulted in a 1 degree F temperature increase in New Mexico, and will likely decrease river flows while simultaneously increasing water demand. Currently, New Mexico loses roughly 7% of its water to evaporation. Rising temperatures will increase this evaporation, droughts will be longer, and there will be a decline in snowpack. As it becomes hotter and drier, more streams will only flow after precipitation events, resulting in more ephemeral waterways and fewer perennial rivers. To make matters worse, competition for water – necessary for irrigation, recreation, drinking water, industry, and environmental reasons – will increase.

The Santa Fe River, a tributary to the Rio Grande, is 46 miles long. The Santa Fe River watershed is roughly 285 square miles, and the river provides about 40% of the City of Santa Fe’s water supply. Santa Fe county gets 57% to 69% of its drinking water from ephemeral, intermittent, or headwater streams. Given the aridity of New Mexico, the Santa Fe River has always flowed intermittently in areas. However, impoundments for drinking water in the upper reaches and additional wells to satisfy water needs have resulted in a lower water table. Today, the Santa Fe River is perennial near the headwaters, but becomes intermittent and then ephemeral as it flows downstream. Finally, the river is dominated by effluent from National Pollutant Discharge Elimination System (NPDES) discharges. The U.S. EPA currently regulates these discharges under the Clean Water Act in order to protect the water quality of this river. Under the proposed redefinition of waters of the United States, U.S. EPA would no longer be able to regulate these discharges, imperiling the drinking water supply for the region. 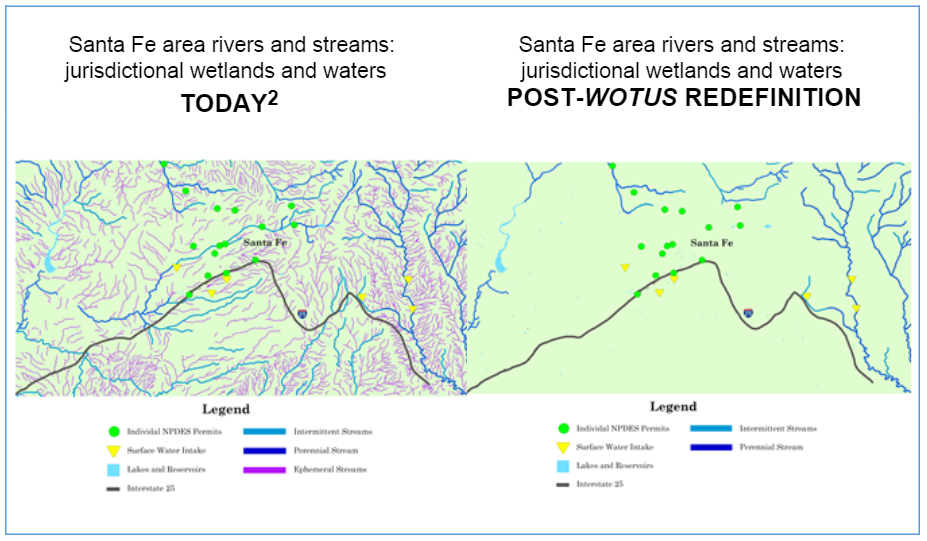 Virtually all of New Mexico’s waters and wetlands will lose protection under the federal Clean Water Act if the proposed rule is finalized. This will impact not only fish and wildlife, and the tourism industry, but will drastically impact the availability of clean drinking water. Moreover, the last stretch of the Santa Fe River is on tribal lands, and destruction and pollution of the river and its tributaries upstream would have disastrous consequences for the tribe relying on the water for cultural purposes, drinking water, and irrigation.