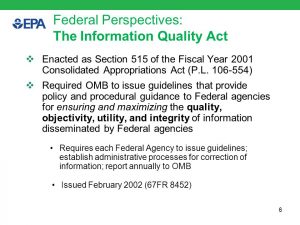 (sometimes called the Data Quality Act) requires that all materials relied upon or distributed by federal agencies be of the highest “quality, objectivity, utility, and integrity.”

Under Office of Management & Budget guidelines, each federal agency has adopted rules for handling complaints calling for the correction or retraction of official materials that violate information quality standards and appeals if a complaint is denied.

PEER has filed many Information Quality complaints, usually on behalf of federal scientists, because they –

Since there are few other tools to compel federal agencies to be honest and unbiased, as detailed in the news releases below, PEER has used Information Quality Act complaints to protect endangered wildlife ranging from Florida panthers to sea turtles, and to address safety and health threats ranging from artificial turf to tsunamis.

Coyote Control Based on Scientific House of Cards

FISH AND WILDLIFE DIRECTOR OVERRULES HIS OWN SCIENTIFIC PANEL

June 23, 2003
Concedes That Half of Forests Will Never Be Restored
Read More

May 28, 2003
Finding Relied on Invented and Distorted Studies
Read More