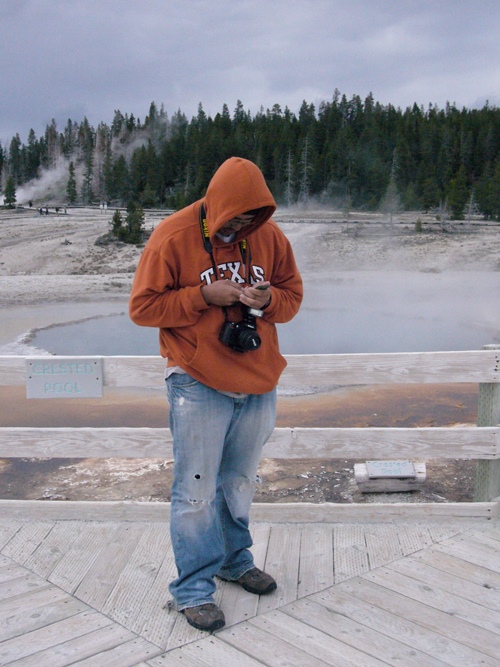 Cell phone towers have sprouted up in national parks across the country because the National Park Service lacks a coherent policy on cell coverage in park areas.  As a result, the incessant chirp of the cell phone can be heard in the wild backcountry as well as at iconic places like Old Faithful.

Few parks have adopted a plan for cell towers or wireless communication.

Nonetheless, the Park Service is moving ahead with an industry-sponsored initiative which would change the way many visitors experience national parks.  This plan would significantly expand cellular and internet “connectivity” inside parks, at not just visitor centers but along most roads and at major sites such as trailheads.  The plan would also cede control and placement of facilities, as well as interpretive content about the park, to private concessionaires.

This stealth scheme to wire our national park system has advanced with little public involvement.  It will mean more ugly cell towers marring park vistas and “spill-over” coverage in wilderness and backcountry.  It is also a giant step to further “Disney-fy” our parks, replacing rangers with corporate icons as your guides.

March 18, 2021
DESCRIPTION: Letter to Department of Interior to extend the Suspension of Delegated Authority from January 20, ...
Read More

Yellowstone’s Quandary: How Do You Fix Ugly?

October 22, 2012
Disingenuous Call for Public Comments Does Not Cure Violations of Law and Policy
Read More

CELL TOWER TO RISE IN CENTER OF YELLOWSTONE PARK

CYBER-PARKS COMING TO A FLAT SCREEN NEAR YOU

YELLOWSTONE DOUBLES ITS CELL PHONE USE AMID TOWER STRUGGLES

May 3, 2006
Industry Invited to Illegal Closed-Door Meeting to Divide Up Park
Read More

CELL PHONE RINGS COMING TO EVERY CORNER OF NATIONAL PARKS

June 9, 2005
Revamped Tower Will Still Be an Eyesore
Read More

OLD FAITHFUL CELL TOWER MAY BE SHORTENED AND CAMOUFLAGED

PARK SERVICE WANTS TO KNOW WHERE CELL TOWERS ARE LOCATED

CAN YOU HEAR ME NOW? CELL TOWERS SPREADING THROUGHOUT NATIONAL PARK SYSTEM

CELL PHONE TOWER AT OLD FAITHFUL IS AN EYESORE