Due to a combination of increasing coastal ship traffic, smaller crew size, bigger vessels and faster speeds, fatal collisions between ships and whales are on the rise. Federal agencies are resisting actions designed to protect whales from collisions with ships. As a result, fatal ship strikes on whales are becoming a leading threat to survival. Deafening underwater noise levels also prevent whales from hearing approaching propellers.

Today, there are fewer than 350 North Atlantic right whales left in existence. A primary cause of right whale injury and mortality is entanglements in fishing gear. Yet, National Marine Fisheries has not implemented decisive measures to reduce these entanglements, due in part to fishing industry opposition.

Unfortunately, the United States is doing very little to reverse this trend. The National Oceanic and Atmospheric Administration (NOAA), the agency in charge of fisheries management and endangered marine animals, could give the right whale a much better chance of surviving, but it is choosing inaction over action, death over life. These solutions include requiring certain fisheries to move to ropeless fishing gear, expanding fishery closures, and creating mandatory and enforced vessel speed limits when right whales are present.

However, instead of taking swift action, NOAA is tying itself in bureaucratic and political knots. For example, in 2021 PEER submitted comments on a proposed NOAA rule intended to limit the fishing gear entanglement risks for right whales. These rules do not go far enough. The rule attempts to reduce the risk of serious injury and death of right whales in the fisheries by at least 60 percent, instead of reducing the risk by at least 80 percent, as most scientists agree is necessary.

The North Atlantic right whale can recover, but only if NOAA takes decisive action that supports a balanced use of our oceans. 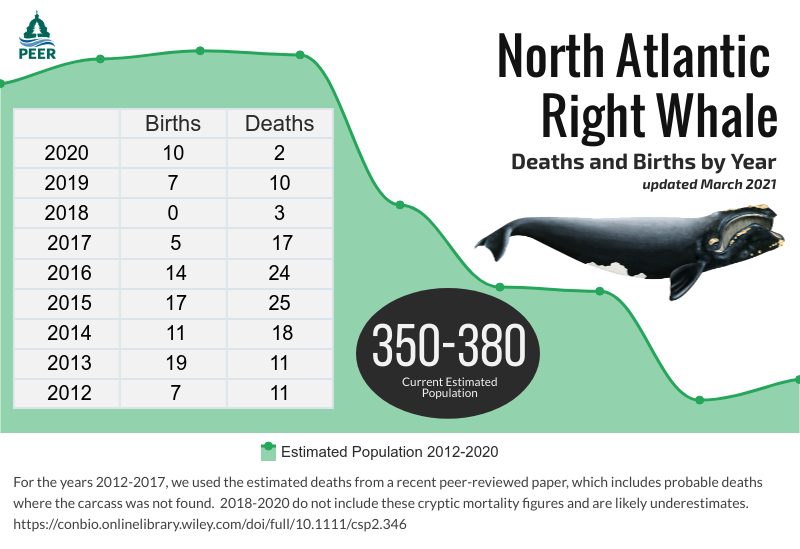 Between 20 and 35% of all whales found dead show cuts and blunt trauma consistent with a ship strike;

Ship strikes are the largest known cause of death for the endangered North Atlantic right whale, and particularly calves who have undeveloped diving capability. The risk of ship collision is now the biggest threat facing the blue whale, the largest mammal on earth; and

The vast majority of ship strikes are not reported. In fact, 42 of 292 incidents were logged only because whale carcasses were pinned to the prow of ships entering harbors.

January 9, 2023
Our elected officials and government agencies must do better to protect the North Atlantic right whale.
Read More

January 3, 2023
Petition to NOAA Administrator to require trap fisheries to convert to new rope-less or “pop-up” gear within the ...
Read More

November 15, 2022
Protecting biodiversity and endangered species such as the North Atlantic Right Whale is one of the great ...
Read More

PEERMail | Save the Right Whales

August 22, 2022
Extinction is a choice that humans often make about animals and nowhere is that truer than with the North Atlantic ...
Read More

March 11, 2021
The North Atlantic right whale is one of the most critically endangered whales on the planet and NOAA's inaction ...
Read More

July 29, 2020
NOAA’s Past Accommodations of Lobster Industry Come Back to Bite It
Read More

July 15, 2020
As the North Atlantic right whale careens toward extinction, NOAA leaders refuse to act on the findings of the ...
Read More

NOAA Balks at Steps to Save Remaining Right Whales

July 9, 2020
The IUCN has uplisted the North Atlantic right whales from endangered to critically endangered which means is it ...
Read More

June 5, 2020
Trump is stripping protections of our public lands off the New England coast, a critical conservation area for ...
Read More