The North Atlantic right whale is one of the most critically endangered whales on the planet. In another tragic turn for this iconic whale, a 12-year old adult male named Cottontail was found dead a few weeks ago off the coast of South Carolina. 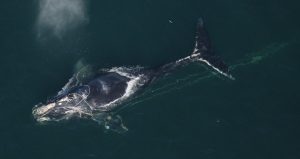 Cottontail’s cause of death was most likely from starvation due to entanglement in fishing gear. Virtually all known right whale deaths are from entanglement in fishing gear and ship strikes. These human activities, which can be easily modified or changed, are driving the North Atlantic right whale to extinction. With a current population of about 360 and fewer than 100 breeding females, this whale’s future is bleak. In the past five years alone, over 120 right whales have likely been killed due to human activity.

Unfortunately, the United States is doing very little to reverse this trend. The National Oceanic and Atmospheric Administration (NOAA), the agency in charge of fisheries management and endangered marine animals, could give the right whale a much better chance of surviving, but it is choosing inaction over action, death over life. These solutions include requiring certain fisheries to move to ropeless fishing gear, expanding fishery closures, and creating mandatory and enforced vessel speed limits when right whales are present.

However, instead of taking swift action, NOAA is tying itself in bureaucratic and political knots. For example, PEER recently submitted comments on a proposed NOAA rule intended to limit the fishing gear entanglement risks for right whales. These rules do not go far enough. The rule attempts to reduce the risk of serious injury and death of right whales in the fisheries by at least 60 percent, instead of reducing the risk by at least 80 percent, as most scientists agree is necessary.

The North Atlantic right whale can recover, but only if NOAA takes decisive action that supports a balanced use of our oceans. “The North Atlantic right whale is the world’s first large whale species nearing extinction,” notes PEER Science Policy Director Kyla Bennett. “Its extinction is entirely preventable. NOAA has powerful tools to protect this species, but it is choosing not to use them. In this case, NOAA is choosing extinction.”

As a country, we are allowing intelligent, curious, and playful animals like Cottontail to go extinct. PEER is going to do everything in its power to make sure that doesn’t happen.