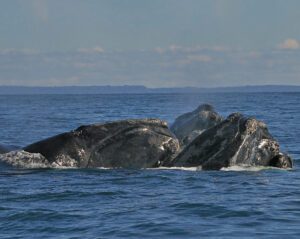 How to better care for and protect the Earth’s remaining biodiversity is a major reason that public employees come to us for assistance.

Such is the case with our work on the North Atlantic right whale. For over a decade, PEER has been pressuring the National Oceanic and Atmospheric Administration (NOAA) to take stronger steps to protect the critically endangered North Atlantic right whale from extinction. In 2019, we filed a scientific integrity complaint documenting how NOAA had made false or misleading representations and omitted mention of scientific research in a court case showing that more protections were needed to protect the imperiled right whale from extinction.

This September, we were delighted to have a former NOAA scientist who assisted us in filing this complaint, Dr. Peter Corkeron, give remarks and host a Q&A session at an in-person screening of the film, The Last of the Right Whales. The film documents the threats to the critically endangered North Atlantic right whales of death from entanglements in fishing gear and ship strikes.

Dr. Corkeron is now a Senior Scientist at the New England Aquarium. He is one of countless scientists who have come to PEER to help us push the government to do a better job saving species, habitats and ecosystems, and to recognize the seriousness of the extinction crisis and to act accordingly.

We are also currently working with current and former government employees to protect the sage grouse, sea turtles, crabs, the Louisiana Black Bear, manatees, and wolves.

Protecting biodiversity is one of the great challenges of our time period. However, as our work on the right whale illustrates, campaigning to protect species is a long-term endeavor, and progress is often incremental. After years of prodding and lawsuits, NOAA is now implementing stricter speed limits for boats in some areas and contemplating greater testing of ropeless fishing gear. But much more needs to be done.

By being a voice for those in government who believe we need to be better stewards for all living things, our goal is to work to protect the enormous variety of life on earth. As we have witnessed firsthand with the endangered right whale, too much is at stake to do otherwise.

We hope you will sign our petition urging NOAA to move swiftly to require ropeless gear in certain fisheries to protect the North Atlantic right whale.

This commentary was originally published in the Fall 2022 edition of PEEReview.