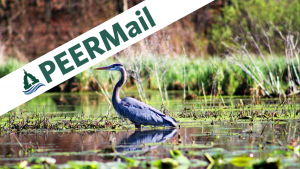 This week, PEER joined 13 conservation groups in filing a lawsuit in federal court against the administration’s effort to eliminate clean water protections for wetlands and streams that feed drinking-water sources for 200 million Americans. The Southern Environmental Law Center filed the challenge on behalf of PEER and the 13 other groups. PEER earlier filed a Scientific Integrity Complaint with EPA that demonstrated that the drafting of the rule by EPA deliberately ignored, or shunted aside, the agency’s scientific integrity requirements. PEER’s Complaint relied on confidential disclosures provided by several still-active EPA scientists, and was endorsed by a large number of retired EPA and U.S. Army Corps officials.

Also this week, PEER and the Western Watersheds Project issued a notice of intent to sue the Interior Department if Secretary Bernhardt keeps in place the acting director authority of William Perry Pendley at BLM and David Vela at the NPS. The secretary’s orders violate both the Federal Vacancies Reform Act and the appointments clause of the Constitution. The fact that both BLM and the NPS have not had legally appointed leaders during this administration is part of Trump’s pattern to hallow out the federal government to benefit private interests.

With an election looming and a pandemic gripping the United States, the Trump Administration is rapidly working to dismantle environmental and conservation protections. These difficult times won’t stop us from fighting for our civil servants, scientific integrity and the rule of law.

Stay safe as we navigate this difficult terrain together.

P.S. Your contributions, large and small, make all the difference, and enable us to keep fighting to protect whistleblowers, public health and the environment. We have an anonymous donor who will match all donations for the next month up to $1,000. Here’s your chance to double your impact with a donation to PEER.

As governments struggle with strategies on how to begin reopening, National parks are caught between a presidential edict to hasten a reopening and social restrictions ordered by state and local health officials. PEER is cautioning against reopening Parks too soon and urging the NPS to address chronic crippling overcrowding. In March, as the pandemic was taking hold, PEER exposed Department of the Interior talking points distributed to the field downplaying the seriousness of the virus and praising the President’s response. Most parks closed only after tremendous pressure from employees and local and state officials.

One of EPA’s first significant actions during the pandemic was to announce – at the request of the oil and gas industry — that it would stop almost all enforcement and compliance activities during the pandemic. It has since released guidance to critical workers in its Superfund program and other toxic cleanup employees that has sowed further confusion about the agency’s priorities and its ability to protect its employees. Since EPA’s political leaders have spent the last three years using their powers to gut public health and environmental protections, their actions during the pandemic should come as no surprise.