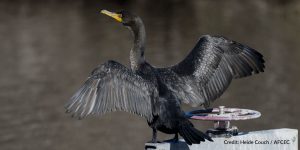 To benefit catfish farmers, the U.S. Fish & Wildlife Service has issued multi-state “depredation” orders that result in the elimination of an estimated 50,000 double-crested cormorants per year.  If fully implemented the orders could authorize “take” of as many as 160,000 cormorants per year – almost 10% of the entire estimated North American population.

Distressingly, the Service keeps renewing these depredation orders without analyzing their biological effects or even whether they enhance fish populations. Despite heavy cormorant “culling” catfish farming has declined precipitously in the past decade, yet the Service has not adjusted the depredation orders accordingly. Nor does the agency bother to consider non-lethal alternatives, such as putting nets over catfish hatcheries.  Instead, it blindly Xeroxes forward open-ended eradication authorizations.

Meanwhile, executing these orders introduces tons of lead-based ammunition into sensitive aquatic environments and harms untold numbers of co-nesting birds.  The nation’s leading experts on the bird came to PEER for help in ending these eradication orders and we are spearheading a direct legal challenge.

Meanwhile, in the West, Wildlife Services is behind a scheme to convert the tunnels and blinds used for decades by researchers on Oregon’s East Sand Island to study the West’s biggest pelagic bird rookery into killing platforms.  The plan is for Wildlife Service teams armed with sniper rifles, silencers and night vision goggles to wipe out nearly one-third of the entire population of double-crested cormorants in Western North America.

October 29, 2014
Legal Bid to Save a Quarter-Million Aquatic Birds From Slaughter Across 24 States
Read More