Impact of Proposed Waters of the U.S. (WOTUS) Redefinition on Wetlands and Waters in South Dakota 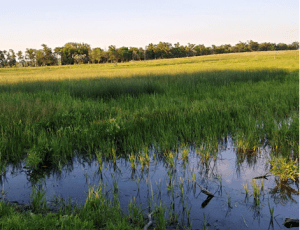 South Dakota originally contained an estimated 2.7 million acres of wetlands. Today, less than 1.8 million acres remain due to filling, draining, and conversion to cropland. In the eastern half of the state, 92% of these remaining wetlands are temporary and seasonal pools known as prairie potholes. In addition, an estimated 86% of South Dakota’s streams are ephemeral or intermittent. All of these wetlands and waters, although seasonal, are vitally important.

Prairie potholes are small, often isolated depressions of fresh water found in North Dakota, South Dakota, Wisconsin, and Minnesota. These extensive potholes scattered throughout the plains fill with snowmelt and rain each spring. More than half of North America’s migratory waterfowl rely on these potholes for breeding and feeding. Agriculture and development has destroyed roughly half of this critical prairie pothole habitat, and some areas have lost as much as 90%. Continuing wetland loss in the prairie pothole region is estimated to be approximately 13,000 acres/year.

Which South Dakota wetlands and waters are currently protected under the federal Clean Water Act?

Under the 2015 Clean Water Rule, prairie potholes were determined to benefit downstream water integrity due to shallow subsurface water connections, groundwater flows, and through biological and chemical connections. As such, they were considered deserving of federal protection. In addition, ephemeral and intermittent streams were afforded protection so long as they occasionally exhibited a bed, bank, and an ordinary high water mark. Before the 2015 Clean Water Rule, jurisdictional determinations were made on a case-by-case basis. Specifically, if a wetland or water was found to have a “significant nexus” to a traditionally navigable waterway, it was jurisdictional. Given the significance of prairie potholes to migratory waterfowl, this significant nexus was easy to demonstrate.

Which South Dakota wetlands will no longer be protected under the federal Clean Water Act after the proposed WOTUS redefinition takes effect?

The proposed WOTUS definition removes jurisdiction from all ephemeral streams and geographically isolated wetlands, and some intermittent streams. Therefore, the vast majority of streams and prairie potholes in South Dakota would no longer be protected under the federal Clean Water Act.

The prairie pothole region provides habitat to waterfowl, other waterbirds, songbirds, raptors, and grassland birds. Waterfowl species relying on prairie potholes include pintail, blue-winged teal, redheaded duck, canvasback, and gadwall. Many migratory birds stop in this region to and from northern breeding grounds, including the snow goose, wigeon, and lesser scaup. Shorebirds, including long-billed curlew, Wilson’s phalarope (pictured below), American golden plover, sandpipers, and the Hudsonian godwit, also use the potholes. Waterbirds such as pelicans, rails, and herons, and grassland birds such as bobolink, sedge wren, and grasshopper sparrow, also depend on this habitat. Water smartweed (Polygonum amphibium) Several Native American tribes used Water smartweed as food, and derived medicines from the roots, stems, and leaves. The plant’s small nuts are an important food source for waterfowl and small mammals. Smartweed also stabilizes soil and purifies water. Birds that are migrating use these small depressions to rest and feed. Some species nest in the prairie potholes. Migrations are between 3,000 and 8,000 miles, and prairie potholes are necessary stop overs during t hese long trips. The prairie potholes are filled with plants and invertebrates upon which many species of birds feed.

The Trump Administration’s draconian proposal to redefine waters of the United States will wreak havoc on the wetlands and waters of South Dakota. This impact would affect not just the state, but also the continent, as more than 50% North America’s migratory waterfowl rely on prairie potholes for feeding, resting, and breeding. Moreover, the proposed rule would eliminate jurisdiction from the vast majority of South Dakota’s streams, which would result in increased flooding, and impacts to drinking water quality and quantity.