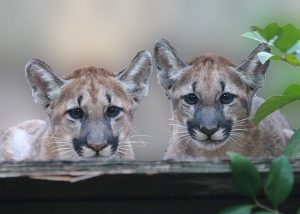 The Florida panther is clinging to survival on a habitat area that represents just five percent of its original range. Once abundant throughout the state, the panther now occupies just a few parcels in southwest Florida in a population that is thought to number around 100 animals.

While the panther’s survival is increasingly imperiled by habitat loss, vehicle collisions, and loss of genetic diversity, the U.S. Fish and Wildlife Service (FWS) has yet to designate critical habitat to protect what little viable habitat area remains for the iconic cat. Despite agreement by biologists that the species faces a high likelihood of extinction in the absence of protections for its remaining habitat, FWS continues to approve new roads and other development in the heart of panther country. 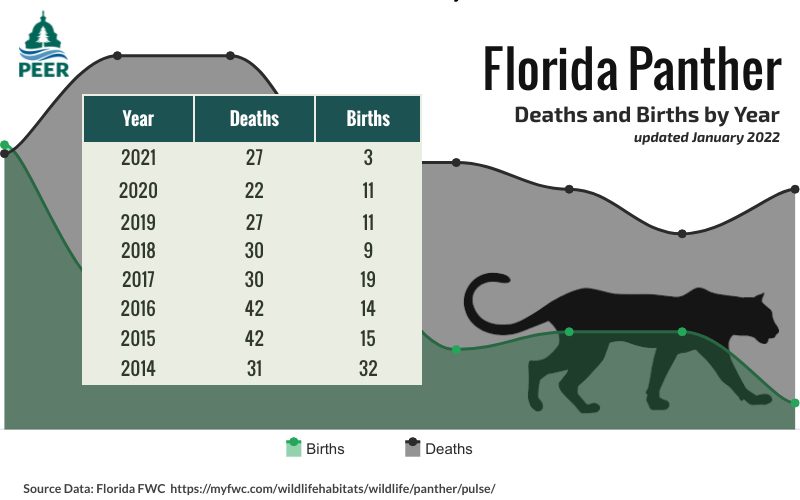 In its checkered history of panther conservation, the Florida Fish & Wildlife Conservation Commission has hidden behind numerous excuses to justify its failure to act including flawed science and the position, outlined in its Recovery Plan, that insufficient habitat exists in Florida to allow for recovery, regardless of agency actions. Panther biologists say that the panther can recover in Florida, given the political will to establish and enforce protections. However, that political will seems to take a backseat to the whims of ranchers and developers.

February 1, 2022
Infographic: For the sixth year in a row, mortality of the highly endangered Florida panther has substantially ...
Read More

Another Lethal Year for Florida Panthers in 2017

December 29, 2014
50% Increase over Prior Year; More Than a Third Females of Kitten-Bearing Age
Read More

Is the U.S. Fish & Wildlife Service the Next MMS?

Lawsuit Filed to Win Critical Habitat for the Florida Panther

Lawsuit to Be Filed Over Delay in Protecting Florida Panther Habitat

December 22, 2009
Lawsuit to Be Filed Over Delay in Protecting Florida Panther Habitat Washington, DC — A coalition of conservation ...
Read More

Fish & Wildlife Service in Florida: Portrait of a Failed Agency

June 22, 2009
Only One Jeopardy Opinion in Nearly 6,000 Consultations as Staff Told to Refrain
Read More

May 5, 2004
All Staff Required to Watch Video and
Read More