Working for the U.S. Department of Energy (DOE), my team investigated groundwater contamination coming from several former uranium mill sites from 2012 to 2016. The DOE Office of Legacy Management (LM) management initially sought out my advice based on my 30+ year career that began with the U.S. Nuclear Regulatory Commission (NRC) in 1984 focusing on uranium mill tailings cleanup and later with the U.S. Geological Survey (USGS) conducting investigations of natural and contaminated groundwater. 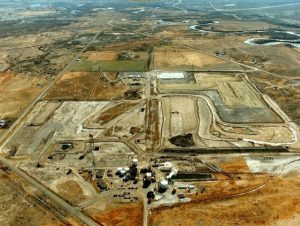 At Riverton, Wyoming on the Wind River Indian Reservation (WRIR), a company built a mill in the 1950’s to process uranium ore for the Atomic Energy Commission used for making nuclear weapons. The mill only operated less than six years until 1963 then became a waste dump containing low level radioactive waste. Two tribes, the Northern Arapaho and Eastern Shoshone who share the WRIR, lived around the toxic site for over 30 years until the DOE removed the mill tailings (shown in the photo) and restored the land. A remaining contaminated groundwater plume was predicted to “naturally flush” and be removed within 100 years as allowed by EPA and NRC rules.

However, a river flood resulting from rain and snowmelt in 2010 caused groundwater contamination to spike about 60 times above standards but no one knew why. Our investigation and subsequent journal article found contamination remaining in soil and rock materials connected to the groundwater plume from the former mill site to the river which would likely prevent groundwater from cleaning up naturally. This unpopular finding challenged the compliance strategy at Riverton and several other sites forcing the Agency to evaluate alternatives. I left the Agency in April 2019.

“The environmental liability…was estimated at $7.35 billion in fiscal year 2019 and…is expected to grow as LM acquires more sites. Long-term surveillance and maintenance activities associated with radioactive and hazardous waste, such as treating residual groundwater contamination, account for about 40 percent of the costs. Officials said LM is taking steps to reduce its environmental liability at its current sites, such as exploring alternative approaches for reducing residual contamination.”

For example, on the Navajo and Hopi Reservations and possibly at many other sites including Riverton, DOE-LM is proposing to make existing contamination acceptable. The GAO report states,

“At the Tuba City site in Arizona, LM is conducting an environmental assessment to weigh options for a new groundwater treatment strategy. According to the site manager, the current strategy, which involves injecting clean water into the site’s contaminated aquifer to flush out contamination, does not cost-effectively address the root cause of the groundwater contamination. Among other options, LM may use its assessment to seek alternate concentration limits accompanied by restrictions to grazing and water use, which LM officials said could be a cost-effective way to manage residual contamination.”

There are many recent advancements for cleaning up groundwater such as using apatite barriers which my colleagues and I encourage DOE-LM to seek alternatives that improve the environment and avoid proposing higher “alternate concentration limits” that would make existing contamination permissible. Fortunately, GAO and PEER are revealing government actions and inactions.

Bill Dam is a guest contributor and now an independent environmental scientist and managing owner of Conserve-Prosper LLC.