Washington, DC — During the past half-century, the Bristol Bay red king crab has plummeted from Alaska’s most valuable single-species fishery to a remnant population nearing commercial extinction. This precipitous decline was not due to any natural phenomena but the result of long-standing scientific obfuscation and falsification by the fisheries branch of the National Oceanic and Atmospheric Administration (NOAA), according to a complaint filed today by Public Employees for Environmental Responsibility (PEER). 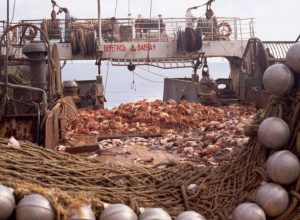 photo by Doug Smith, former NOAA Fisheries observer
Contents of a “red bag” delivered by a domestic trawler to a foreign processor. After this photo, domestic trawlers quit bringing red bags back to the processors and instead dumped them at sea. Most of these are large females with developing egg clutches, i.e., the brood stock. As was typical, none of the several thousand red king crab shown here were counted or measured before being discarded. The scene depicted here suggests how quickly the reproductive capacity of Bristol Bay red king crab might have been eroded. Yet, the model used by NOAA Fisheries deceptively included such losses as natural mortality and not fishing-related mortality

The complaint, filed through PEER by Dr. C. Braxton Dew, a fisheries biologist with more than 40 years of experience, 25 of those with NOAA Fisheries, charges that the agency paved the way for this collapse by engaging in sampling bias and data falsification, which inflated annual population estimates and led to a multi-year regime of ruinous overfishing.

Even after that collapse and for the ensuing forty years, NOAA Fisheries has –

“Managers pushed the natural mortality story because they knew it might divert the focus from overfishing to natural catastrophe, thus avoiding the Magnuson-Stevens Act requirement for a cessation of fishing under a rebuilding plan,” said Dr. Dew. “It appears to have worked.”

The complaint was filed under the Information Quality Act, which requires that information distributed by federal agencies, especially technical and scientific information, be complete and accurate. The complaint seeks a correction of the scientific record, including rescission of NOAA Fisheries stock assessment and fishery evaluation reports for the Bristol Bay red king crab for the years between 2015 and 2020.

“For decades, NOAA has pretended the red king crab collapse was caused by mysterious, unidentified natural causes rather than by its own mismanagement,” stated Pacific PEER Director Jeff Ruch, noting that President Biden has directed agencies to improve the integrity of their scientific work. “How NOAA Fisheries responds to this complaint will indicate whether the agency will finally be honest and admit what it did – and is still doing.”