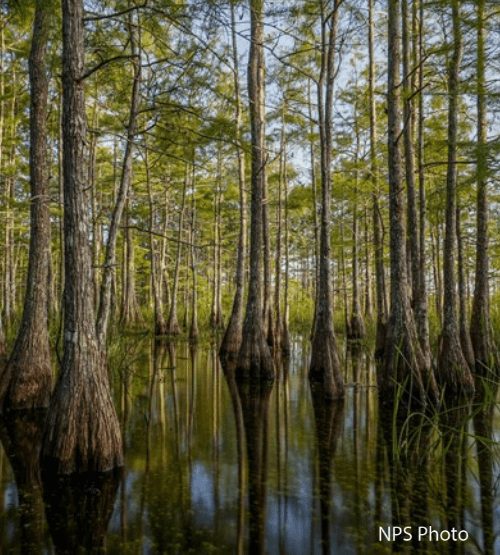 Although the NPS is a wilderness-managing agency, it has ignored some fundamental wilderness responsibilities imposed both by law and policy. Contributing to these lapses is a variety of reasons, some historical and others organizational, including inertia, political opposition and lack of sufficient system-wide oversight.

This web-center eliminates at least one impediment – the lack of a comprehensive record. From that record, the steps ahead needed to reclaim the “orphaned” NPS wilderness legacy become apparent.

STEP 1. Enact wilderness recommendations for 17 parks that have been submitted to Congress and on which Congress has not yet acted.

There are 17 parks for which the Secretary or the President has submitted recommendations to Congress and on which Congress has not acted. The extant recommendations for the parks were transmitted to Congress between 1974 and 2002 and encompass over six million acres. The following list of the 17 parks shows the date of the latest and governing recommendation.

In the interim decades since the President submitted these recommended designations to Congress, land status and other factors have changed for several parks that would alter the contours of the original recommendation. Former nonfederal lands are now Federal. Congress has expanded some park boundaries. Thus, the acreage numbers for several parks with recommended wilderness will require technical adjustment and reformulation

STEP 2: Finalize and submit eight longstanding wilderness proposals that have yet to be recommended to Congress

The NPS has prepared wilderness studies and proposals, and in most, if not all, cases conducted public hearings for eight other parks outside of Alaska that have never been submitted to either the Secretary, the President or transmitted to Congress. This class of parks encompasses approximately 2,450,000 acres of wilderness or potential wilderness.

The NPS needs to transmit these as proposals to the Secretary, and the Secretary recommend them to Congress. The eight parks and the acres proposed as wilderness in the latest NPS studies are:

Before transmitting these proposals, the NPS needs to determine if they give adequate protection to roadless areas. Some of the proposals can be described as “minimalist” and leave out important roadless tracts. Among these, in particular, are Bighorn Canyon and Cape Lookout. The large area of potential wilderness in Glen Canyon is due to State of Utah lands in 1980; lands that are now Federal due a land exchange with Utah, authorized in 1993.

In the Alaska National Interest Lands Conservation Act of 1980 (ANILCA) Congress designated 32.9 million acres of wilderness in the national parks, preserves and monuments in Alaska. The act also required that the Secretary study an addition 21.8 million acres of park land for wilderness designation and make a recommendation to the President by December 1985 ((P.L. 96-487; 94 Stat. 2486).

In November 1988, the NPS prepared a final environmental impact statement on the studies for the 13 parks involved. The Draft EIS found nearly 16.9 million acres as qualified for wilderness.

The failure to act on the remaining wilderness qualified lands in Alaska parks is a deficiency of long-standing. Because of it, parks like Aniakchak, Bering Land Bridge, Cape Krusenstern, Kenai Fjords and Yukon-Charley have no wilderness at all.

The NPS has never held public hearings on the wilderness recommendations for Alaska. The NPS needs to do so and then formulate a recommendation to submit to the Secretary and the Congress.

The 13 parks involved in Alaska are:

NPS Director’s Order No. 41 requires that every park with potential wilderness must inventory such lands within two years (i.e. by August 2, 2001) and publish re-designation notices where appropriate.

Potential wilderness is not to be confused with recommended or “possible” wilderness. Rather, potential wilderness is land Congress has specifically designated as qualifying for wilderness as soon as certain uses prohibited by the Wilderness Act have ceased. Upon such cessation, Congress authorizes the Secretary of the Interior to re-designate such lands as full wilderness by publication of a notice in the Federal Register.

At first, the NPS applied the term “wilderness reserve” to such lands, presuming that Congress could place the lands in a half-way-house on the way to wilderness. Finally, the NPS settled on the term “potential wilderness.” The term began to appear in NPS wilderness recommendations to Congress with Colorado National Monument in early 1972. Congress accepted the term and adopted it for the first time when enacting wilderness laws for several parks on October 20, 1976.

Potential wilderness is an unnecessary designation. In national forests, Bureau of Land Management public lands and in some parks (such as Mojave National Preserve and Joshua Tree additions of 1994) Congress designated areas as wilderness even though they contained non-federal lands. The nonfederal lands within a wilderness boundary are not wilderness by definition of the Wilderness Act. When such lands become Federal the lands immediately become wilderness without any further action.

Note on Death Valley – In 2010, the NPS re-designated over 6,700 acres of the 6,840 acres of potential wilderness, designated by Congress in 1994, by means of the written legal description process. This method of re-designation was procedurally flawed and violated the re-designation process prescribed in the California Desert Protection Act of 1994 (section 601(b)). The following chart, however, shows the NPS determination of 2010 that only 118 acres of potential wilderness exist in Death Valley.

The 19 parks with remaining designated potential wilderness are:

In many of the above parks the potential wilderness has become Federal lands and/or all prohibited uses have ceased. These lands need to be re-designated as wilderness.

Congress created many parks after the Wilderness Act in1964. Some but not all of the laws creating the parks required the Secretary to review the lands for wilderness. Reference Manual 41 (page 11) and Director’s Order No. 41 require that the NPS conduct suitability studies of roadless areas within all parks, not just those in existence on September 3, 1964. NPS Management Policies 2006 also require such a review:

“[A]ll lands administered by the National Park Service, including new units…since 1964, will be evaluated for their eligibility for inclusion in the national wilderness preservation system.” Management Policies 2006, 6.2.1., p. 120.

The NPS has not evaluated the eligibility for at least the following 12 parks created after 1964 that contain significant roadless areas. Other parks, not listed, may be too small for any viable wilderness. Date of establishment in parentheses.

Channel Islands was once among these park areas. However, in April 2009, the NPS initiated a full wilderness study for Channel Islands National Park. In 1980 Congress mandated that the Secretary review and report to the President a wilderness recommendation for Channel Islands (16 U.S.C. 410ff-5). The recommendation was due by October 1, 1983. The NPS never conducted the study and never developed a proposal or recommendation. However, on April 24, 2002, NPS Regional Director John Reynolds sent a wilderness suitability assessment memo to the NPS Director. On April 8, 2009, the NPS announced the expansion of the scope of the General Management Plan and Environmental Impact Statement for Channel Islands to include a full study of wilderness. Draft GMP/EIS not yet been made Final. This is the longest example of a failure to conduct a statutorily required wilderness review in the entire national park system. It is now approaching 40 years overdue

STEP 6: Assess significant additions made AFTER the Wilderness Act for wilderness eligibility and further study

By the same token, several parks grew through significant additions after the 1964 enactment of the Wilderness Act. NPS Management Policies 2006 also require that:

“[A]ll lands administered by the National Park Service, including…additions to existing units since 1964, will be evaluated for their eligibility for inclusion in the national wilderness preservation system.” Management Policies 2006, 6.2.1., p. 120.

Through the planning process, primarily development of park General Management Plans, the NPS has or may be undertaking a further review of wilderness in a number of parks that contain significant additions. While some planning documents have studied significant additions to existing parks with wilderness, the NPS needs to complete the evaluations, studies and public hearings preparatory to development of a wilderness proposal to the Secretary of the Interior.

Reviews involving nearly 400,000 acres of additions that should be undertaken or concluded are:

At the end of 2010, NPS managers conducted another assessment that effectively eliminated 40,000 acres from the eligible category to better support ORV use. NPS Deputy Director Wenk signed the revised assessment in May 2011. Of the now-79,000 eligible acres, the Final GMP of December 2011 proposed that only 46,000 acres be made wilderness. PEER challenged this reduction, but the revised determination was upheld by the Eleventh Circuit Court of Appeals on August 31, 2016.

STEP 7: Review all parks in existence on September 3, 1964 with roadless areas for wilderness eligibility and make appropriate recommendation to Congress

Section 3(c) of the Wilderness Act (16 U.S.C.1132(c)) required the Secretary of the Interior to study all roadless areas in the national park system on the date the Wilderness Act became law on September 3, 1964 for wilderness suitability.

The NPS has yet to conduct full studies for at least three parks in existence on September 3, 1964:

At Cape Cod National Seashore, the process has begun. On January 10, 2005, U.S. District Court for District of Columbia ordered the NPS to prepare a wilderness suitability assessment for Cape Cod. The NPS prepared a suitability assessment for Cape Cod on January 6, 2006. The assessment found that the areas zoned as “Natural” in the parks current General Management Plan were suitable for further study. In a letter of December 8, 2005 to the NPS Director, the Regional Director committed to study these areas for a wilderness recommendation. The study has not yet begun.

At the time that Congress passed the Wilderness Act, Wind Cave was a small national park of 28,000 acres. There is no record that the NPS ever conducted a formal study of the park, or that the Secretary ever transmitted to Congress a recommendation that none of the park was suitable as wilderness. In the 1994 General Management Plan for Wind Cave, the NPS states that none of the lands of the park are suitable. The 1994 GMP states that because of “public and administrative roads that intersect the park, there were no contiguous sections that met all of the criteria for wilderness designation.” In 2005, Congress added 5,675 acres to the park. The NPS has yet to revisit the issue to determine if the addition alters its 1994 conclusion.

Ozark National Scenic Riverways was removed from the above list in previous reports because the NPS conducted a wilderness study in July 2012 as part of a Draft GMP.)

For all parks discussed above, the Wilderness Act requires that the NPS must ultimately make a recommendation to Congress, even if the recommendation is that no acres are suitable for wilderness.

One bright spot is Fort Pulaski National Monument, created in 1924. The NPS never studied this park under the 1964 Wilderness Act directive. But in 2013 the NPS adopted a Final GMP and wilderness assessment for Fort Pulaski. The Record of Decision was signed on September 30, 2013. That assessment determined that 4,500 acres, consisting of undeveloped salt marsh, were eligible as wilderness.

STEP 9: Reexamine determinations of parks with “no suitable acres.”

There are nine parks where the NPS determined that zero acres were suitable for wilderness. The NPS needs to review the suitability conclusions in the following parks (except for New River Gorge) where the initial determinations were based on incorrect standards, or where the disqualifying factor(s) has changed:

This reexamination could add at least another 400,000 acres to the NPS wilderness inventory.

Nearly every statute designating wilderness in an area of the national park system requires that the NPS prepare a written legal description of the wilderness boundary accompanied by an official map. Some parks have not yet met this legal requirement. Director’s Order No. 41 of August 2, 1999 directed that all parks with wilderness meet this goal within 18 months, i.e. by February 2, 2001.

The following parks have prepared neither a legal description nor an official map of their wilderness boundaries: [Note: The date in parentheses is the date wilderness was designated.]

The following parks lack either the legal description, or the map:

Congress designated wilderness in the following parks so recently that the preparation of legal documents may not yet be complete:

Similarly, the NPS should revise its Wilderness Acreage Summary to accurately reflect the number of acres of wilderness. The following categories should be updated for accuracy: