Washington, DC — U.S. Bureau of Land Management employees are now under orders to wear “Vision Cards” on their uniforms displaying official maxims, according to Public Employees for Environmental Responsibility (PEER). These cards are little message boards with aphoristic statements about vision, mission, values, and guiding principles of the BLM.

“The person of federal employees should not be used for political messaging,” stated PEER Executive Director Jeff Ruch, noting the Vison Cards’ similarity to propaganda placards used by totalitarian regimes. “This is supposed to be the Bureau of Land Management not Mao’s Red Guard.” 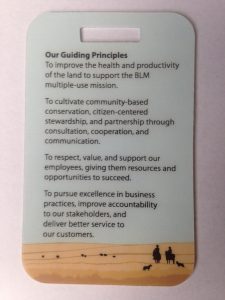 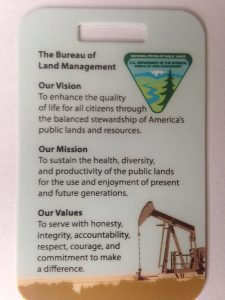 The two Vision Cards for uniform wear repeat language from the agency website. The cards –

It is not clear from where the order to wear the Vision Cards emanates. BLM has no permanent director nor has the Trump White House even named a nominee. During the past year, Interior Secretary Ryan Zinke and a small band of political appointees in DC have dictated BLM policy. While reports of the mandatory card display have reached PEER from the West, the organization is still trying to determine whether the order is national in scope.

One of several ironies about the “Values” statement is that it touts employee “honesty, integrity … courage, and commitment to make a difference.” Yet these very qualities are discouraged as employees are directed to walk in lockstep, given no meaningful channels for feedback to managers, and are subject to an ex-military Cabinet Secretary who demands “loyalty to the flag” by which is meant the departmental pennant raised whenever Secretary Zinke is “in garrison” at the Main Interior Building.

“These mandatory Vision Cards are both hokey and designed to reduce public servants to walking talking points,” added Ruch, noting that Environmental Protection Agency Administrator Scott Pruitt uses the same approach by hanging posters in office hallways proclaiming slogans such as “Certainty for the American economy” is one of EPA’s “Great Environmental Achievements.” “This is a dangerous group think exercise that disrespects and blurs the different roles of BLM specialists. For example, BLM scientists should not strive to ‘deliver better service to our customers.’ Nor should law enforcement rangers be charged with pursuit of ‘excellence in business practices.’”