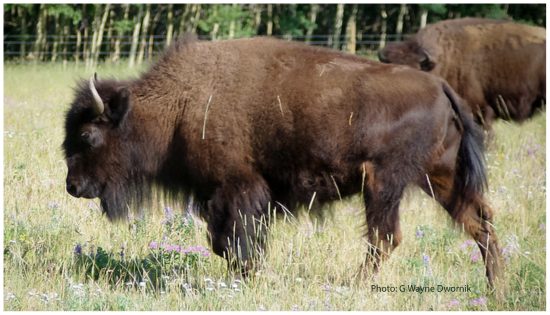 Grand Canyon National Park recently made international news when it advertised a call for “volunteers” to come shoot bison living on its North Rim. That invitation sparked 45.000 applications.

From this avalanche of interest, only 12 people will be selected by lottery. Each “winner” gets the right to shoot one bison and pack its carcass out of the park.

Grand Canyon is at pains to point out that this is not a “hunt” (as hunting is prohibited in most national parks), but a “lethal removal” to reduce the herd’s size. Moreover, there will likely be little chase involved, as these animals are quite habituated to humans, thus providing all the thrill of “hunting” dairy cows.

The herd has grown to an estimated 600 animals, which the park wants to reduce to around 200.

However, killing only 12 animals will make no discernible reduction in herd size. Moreover, new calves will quickly make up the difference, setting aside the dynamic that reproduction in animals such as coyotes often increases in response to human-induced mortality.

So, what is Grand Canyon really trying to do?

Well, it seems that the park itself does not know – and that is what has caused the problem.

How Did They Get There – an Origin Story

In the early 1900s, a rancher named Charles (“Buffalo”) Jones brought a herd of bison to northern Arizona to cross-breed with his cattle. In the depths of the Depression, he abandoned the project, leaving some of the hybrid herd behind. Its descendants, known alternatively as cattalo or beefalo, have lived in Arizona ever since.

Over time, drought and hunting pressure drove these beefalos onto the Kaibab Plateau, giving them access to Grand Canyon National Park. In recent years, that herd has increasingly sought refuge in the park, coming to congregate in a small, very fragile part of the park’s North Rim, where they have apparently learned that they will not be hunted (at least until now).

The remaining marooned herd now numbers around 600 animals. Because they are confined to a small space and do not migrate, the herd is damaging the soil, waters, and flora of the park’s Kaibab Plateau. For example, more than one-third of “special status” plants found in Arizona are found on the Kaibab Plateau.

In 2014, Grand Canyon was developing an evaluation of alternatives, which included removing the beefalo herd from the park altogether. But a group of officials under then-National Park Service (NPS) Director Jon Jarvis came up with the idea to declare these hybrids as native wildlife, which by law and policy could not be extirpated from the park.

The proponents of this plan even came up with a pseudo-scientific report backing this notion. PEER filed a challenge that forced NPS to withdraw the report in 2016.

That embarrassing reversal, unfortunately, did not settle the question of whether the beefalos are native or introduced. The reason for the hesitancy was that, if the beefalo were classified as exotic to the park, NPS policy dictates that such harmful invaders, if not manageable, should be eradicated, like the effort to eliminate Burmese pythons from the Everglades (see NPS Management Policy 4.4.4.2).

So, the Park Service punted, leaving the question unanswered. 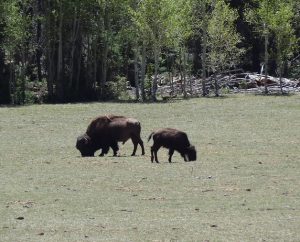 Instead, in 2017, a year after it withdrew claims that the animals were native wildlife, the NPS reached an “initial” decision to reduce the herd to 200 animals.

That initial decision is what is now being implemented some 4 years later. The net result, though, begins the transformation of Grand Canyon from a national park into a game farm. These initial dozen “volunteers” will likely grow in number with each succeeding year, so that, soon, scores of these armed non-hunters will be escorted by Arizona Game & Fish (Grand Canyon’s “partner” in this exercise) to lethally remove beefalo.

This, of course, is much to the delight of Arizona Game & Fish, which is managing the lottery and reaping the interests of thousands of folks who want to come to Arizona to shoot something.

Another indication of NPS’s deliberate ambiguity can be found in a new fact sheet, in which Grand Canyon falsely declares that these beefalos have outgrown their cattle genes and now exhibit the “wild behavior” of bison. It may be that some Grand Canyon officials entertain the fiction that these animals are both wild and native, but the fact that some visitors like viewing bison at Grand Canyon is no more justification for keeping these beasts there than the park introducing giraffes and zebras because they, too, would be real crowd pleasers.

Besides the biological/legal status of these beefalo, the Park Service’s current approach leaves a lot of other unanswered questions, such as:

Furthermore, the NPS approach appears to be very limited. For example, NPS has eschewed suggestions by –

Unfortunately, the quality and nature of Grand Canyon and Park Service decision-making on this resource challenge has been slow, secretive, timid, and highly politicized. The Park Service desperately needs new leadership that is willing to openly take on conservation challenges in order to resolve them, not to simply kick the can down the road.