The first was a sequel to one of the best-selling games of all time, and would come to be known as the “biggest videogame that never was” due to years of project management failures, financial difficulties, and litigation. It became a meme in the gaming community for its seemingly endless delays, won tongue-in-cheek awards as “vaporware” (software that is announced but never released) three years in a row, and in 2011, shocked the world by releasing. Even the New York Times covered the drama when it was finally finished. Nine years after that legendarily delayed release, and 29 years after it began, the EPA’s IRIS Assessment of Formaldehyde has still not seen the light of day. 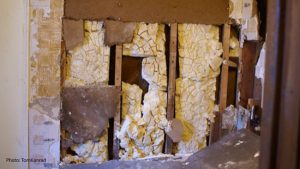 Now the Trump EPA has applied the President’s signature tactic, lying, to make sure that report stays buried and the chemical industry never has to face the possibility of regulation.

Among EPA’s many duties is to catalog the effects industrial chemicals can have on human health. IRIS, a program within the Office of Research and Development, is a database of neutral scientific assessments of the most current research into how those chemicals can affect people. For decades, IRIS reports have been relied upon as the fundamental scientific basis for determining what risk those chemicals pose to people, and then to set policy for how to protect people from those risks.

One of the most ubiquitous chemicals in America is formaldehyde (HCHO), a colorless gas with a powerful odor that is used in creating all sorts of products, including pressed wood products, pharmaceuticals, paper, and leather. It is also found in car exhaust and released by burning natural gas in stoves and heaters. The assessment is supposed to determine whether the formaldehyde exposure levels experienced by millions of workers and consumers is harmful. Formaldehyde inhalation is associated with lymphohematopoietic cancers, such as leukemia.

In January 2018, then-EPA Administrator Scott Pruitt testified before the Senate that it was his “understanding” that the EPA had finished its study of the human health effects of formaldehyde. PEER requested the finished version of the draft assessment shorty after a July 2018 Politico investigation reported that the finished report was being held up politically. After the agency failed to respond to PEER’s request, we filed a lawsuit.

After PEER requested the document, Congress and the Government Accountability Office investigated the delay. GAO’s March 2019 report found that the formaldehyde assessment had been cancelled in summer 2018, at the eleventh hour, after the drafting was finished, when EPA Administrator Andrew Wheeler decided the assessment was no longer needed. At a House Science Committee hearing discussing the report, Rep. Ben McAdams, after explaining that press reports and senate testimony confirmed the draft was complete, asked EPA point blank “what is the status of the formaldehyde assessment?” EPA’s witness responded that they did have such a draft assessment.

The House Science Committee sent a series of letters in April, July, and November 2019 seeking clarification of the agency’s testimony. Each one addressed the “the mysterious delay of the long-completed formaldehyde report,” and the last was accompanied by a subpoena for information from the agency. The agency has been confronted for two years with evidence and investigations concluding that their report has been completed. This month, for the first time, EPA is telling the world that a completed draft does not exist.

When courts review potentially unlawful agency actions, they determine whether a decision was justified. They look solely on the agency’s justification when they took the action, not the government’s “post hoc rationalizations” invented in litigation to explain earlier unreasoned decisions. To my knowledge this has never been applied in FOIA litigation, because until now there was no need for it. That we had to explain “gaslighting” in our reply to the agency may also be a first.

The argument made by the agency, that PEER is pursuing an “imaginary” completed Formaldehyde Assessment, is pure applesauce. In jury trials, if you fail to explain or deny evidence against you when it was first presented, juries can and will consider that in deciding the case. Waiting to explain critical facts until years into litigation over them does not look great.

In this case, either the agency ignored two years of opportunities to correct the record, misleading Congress and GAO investigators, or there is a finished report and the agency just won’t admit it. Neither choice is a good one for the EPA’s credibility as a scientific office or the Trump Administration’s record with Congress and the courts, but sadly, this kind of behavior has become expected. We only hope that in the future the agency will be able to regain some of that lost credibility and finally do the work of protecting the American people, not the chemical industry.