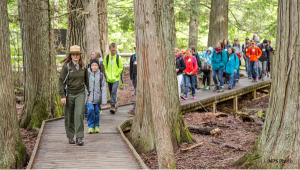 A group of people in a National Park led by a ranger.

This past week, Rocky Mountain National Park, the park with the third highest level of visitors in 2019, stumbled towards reforms with something extraordinary. In response to the COVID-19 pandemic, it adopted a reservation or timed-entry system to prevent overcrowding as it reopened.

The new reservation system ensures that crowds are thinned out, bottlenecks minimized, and that overall visitation will reach no higher than 40% of peak levels.

Rocky Mountain is not alone. Yosemite has also announced that it too will unveil a reservation system.

By contrast, Arches National Park in Utah threw open its gates this past weekend. The crush of visitors forced that park to close again after only three hours.

Ironically, Arches proposed a reservation system back in 2017 but withdrew it due to a combination of local political opposition and lack of support from the Department of Interior, the parent agency for the National Park Service (NPS). This week’s events have caused Arches to revive its once-rejected reservation plan with a goal to have it operational by July.

In recent years, Zion National Park has also been paralyzed by ever-growing crowds. It, too, was forced to drop its reservation plan in the face of opposition from Utah politicians and an order by Interior Secretary David Bernhardt to put the plan “on hold.”

Meanwhile, Yellowstone has reopened but its superintendent, Cameron Sholly, has refused to enforce any social distancing or mask requirements. That park has taken no steps to prevent shoulder-to-shoulder crowds other than keeping some of the park’s entrances closed.

Inviting streams of visitors from all across the country risks virus exposure not only for those visitors but also for park staff and volunteers, who in front-facing positions may encounter hundreds of people very hour. A March 24th planning document estimated that parks not instituting mitigation measures to prevent exposure should expect “40% of the total population at the park will require isolation and 4% will require hospitalization.”

At risk are also park gateway communities, which are usually small towns with little medical capacity.

In the case of Grand Canyon, for example, that reopened park abuts the Navajo reservation, currently one of the nation’s infection hotbeds.

What makes this transition so difficult is that our national parks seem to have grown addicted to overcrowding. Each recent year seemed to set a new visitation record, with many parks more resembling a perpetual traffic jam than a cathedral of nature.

With each new record, NPS has issued a glowing press release, suggesting that overcrowding is a measure of national parks’ relevance and worth.

That is not how it is supposed to be.

The National Parks and Recreation Act of 1978 requires “visitor carrying capacities for all areas” of each park unit. In some instances, carrying capacity may be a hard limit on the number of visitors. NPS policy also prescribes formal standards to prevent unacceptable overcrowding, such as caps on waiting times to see a park feature, maximum number of encounters on trails, or the ability to camp out of sight or sound range of neighbors. In addition, parks are supposed to monitor conditions and establish indicators for excess usage such as soil compaction, exposed tree roots, or vegetation loss.

Unfortunately, a PEER survey of the 108 major parks found almost none have developed carrying capacities. With the pandemic adding safeguarding public health to protecting park resources and the quality of the visitor experience as reasons for parks to curb overcrowding, perhaps more parks will follow the lead of Yosemite and Rocky Mountain.

In order for national parks to remain “America’s Best Idea,” park managers must move from merely maximizing crowds to actually managing them.