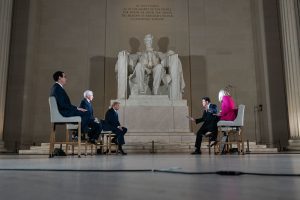 Last Sunday, Interior Secretary Bernhardt ordered the Lincoln Memorial closed to the public so that President Trump could “communicate an official message to the American people” via (what else?) Fox News on the current pandemic.

In his curious “Record of Determination,” Bernhardt felt the need to cite both the Constitution and statutory authority for his action, perhaps because he offered this whopper of an explanation for Trump’s Putin-style Town Hall broadcast:

“I anticipate his doing so will illuminate and reflect the values of our Nation during an unprecedented public-health crisis. Such an action will allow the President and the Nation to use Lincoln’s powerful presence and the solemnity of the Memorial to reflect on and draw from our Nation’s better angels, and to remind all of us that we can knit our often-divided Nation together in a time of trial.”

In reality, however, rather than a message of unity or a conclave of angels (better or worse), Trump proceeded to deliver one of his typical self-serving performances, including –

And this was Trump trying to act presidential.

Yet, despite Bernhardt’s misplaced legal justifications, the law, specifically the Hatch Act, prohibits this type of electioneering inside federal facilities, especially parks and national monuments. In a 2018 ethics advisory, the U.S. Office of Special Counsel, which enforces the Hatch Act, opines that declared candidates may not use federal facilities for “campaign activities, such as town hall meetings [or] press conferences” – precisely what Trump did. This advisory also warns that:

“Federal agencies should ensure that candidates who visit their facilities to conduct official business do not engage in any political campaign or election activity during the visit.”

Of course, Bernhardt took no such steps. As such, he flouted the law and directly aided the never-ending campaign for a president who was a declared candidate for reelection almost from the day of his inauguration.

Legalisms aside, his prediction that the Trump-Lincoln Memorial event would “reflect the values of our Nation” actually reflects a cynical sycophancy as troubling as Bernhardt’s repeated claim that his top priority at Interior is to “fully embrace a culture of ethical compliance.”