The Dumpster Fire Presidency in Review 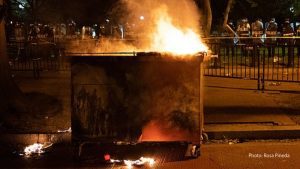 When Donald Trump won in November of 2016, my first reaction was: “the Barbarians are at the gate.” Little did I think that four years later, that would turn into literal reality at the Capitol, in the frightening, deadly insurrection of January 6th. That was the most acutely horrible event of the Trump era, but we should not lose sight of the chronic smaller horrors of this offensive “Dumpster Fire” presidency.

In addition to pursuing regressive, and sometimes illegal, policy changes, the Trump Administration went out of its way over the last four years to violate “good government” laws and norms that have been built up over the last five decades, going back to the Nixon era abuses. Respecting good government principles was far from the minds of the extreme Tea Party-based wing of the Republican Party that Mr. Trump loosed on the nation, whose philosophy is that the Federal government itself is the problem, exemplified by Mr. Trump’s Chief of Staff, Mark Meadows, the former far-right congressman from North Carolina.

The Administration took discrete “bad government” steps that we must not forget. Their overall effect was not only poor performance of their duties, but also agencies were delegitimized in the eyes of many stakeholders. Most tragically, one need go no further than the completely unacceptable Federal response to the COVID-19 pandemic to see the wreckage the Trump Administration is leaving, including a formerly highly-respected agency, the Centers for Disease Control (CDC), whose reputation now is in tatters.

Here is my list of a “dirty dozen” of the worst abuses, each of which I am proud to say that PEER worked on in some form during the last four years (examples cited in the endnotes). Now, our goal is to make sure the Biden Administration does not fall into any of the same bad practices.

Ignoring laws and long-standing norms, weakening Federal agencies, and stripping the protections of civil servants is a recipe for failure. Over the long term, they make the agencies unattractive places to work, which means the quality of the workforce declines. And the quality of the services provided to American citizens declines correspondingly.

So, as the twice-impeached Trump and his enablers exit the stage, good riddance to bad garbage. PEER urges the Biden Administration to take these “good government” issues very seriously and make sure it leaves a positive legacy over the next four or eight years.14The 117th Congress has already proposed bills such as the Protecting Our Democracy Act and H.R. 1, that can help address many of the dirty dozen problems above.15 Doing so is not as dramatic as coping with an insurrection, but still vital to the future health of the government.