At PEER, we’re on the front lines every day of the Trump Administration’s disastrous war on climate science. As a PEER staff attorney working on climate and science issues, I have prepared this special report of PEERNews on climate change to let you know what I do and how you can help.

I am working with PEER to expose – from the inside – the Administration’s efforts to weaken our government’s responses to the climate crises. Trump & Co.’s kowtowing to the interests of coal and oil companies at the planet’s expense is not just intellectually bankrupt, it’s cataclysmic.

We represent Dr. George Luber, PhD, a CDC scientist specializing in the public health implications of climate change. Early in the Trump administration the CDC decided to downplay that it had a climate and health program, and last year it decided to eliminate the climate program’s independence entirely and fire Dr. Luber, who was the head of the program until last April when he was thrown out of the building and ordered not to even come near it if he didn’t want to get apprehended by security. Dr. Luber was a lead author for both the Intergovernmental Panel on Climate Change’s Fifth Assessment Report and the 4th U.S. National Climate Assessments’ Chapter on Human Health, which infamously released last year the day after Thanksgiving. 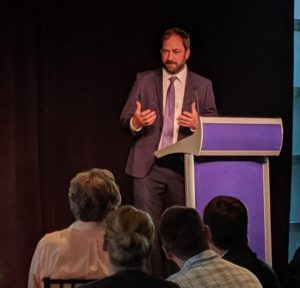 But we won’t let them hide the truth.

Thanks to your donations, we can represent him in his dispute with the agency pro bono, without charging him thousands in legal fees that another office would have to, and in May we had him up from Atlanta this week to receive the Hugh M. Hefner Foundation’s First Amendment Award. The awards honor individuals who have made significant contributions in the vital effort to protect and enhance First Amendment rights for Americans. The address that he delivered was truly moving and has motivated interested members of Congress to fight the Administration and restore the climate program at CDC. Have a look.

Recently, we released 19 leaked documents demonstrating the concerns raised by responsible scientists in the Bureau of Land Management about what a disaster it would be to drill in the Arctic National Wildlife Reserve. The political leadership atop the Department of the Interior wanted to hide the science to protect corporate business interests, and we’re also working hard to document similar efforts by fossil-fuel cronies running EPA to suppress climate science.

While dedicated public servants are trying to maintain the integrity of climate science, political opportunists installed to lead agencies are distorting and suppressing the facts or twisting clearly ominous events into economic opportunities to be exploited at all costs.

The Administration’s disdain for the dangers posed by climate change was on full display at the Arctic Council meeting in Rovaniemi, Finland. For the first time, the Council offered no joint declaration because of U.S. refusal to agree on any text that included the words “climate change.” Instead, Secretary of State Mike Pompeo told Arctic Council leaders that, “Steady reductions in sea ice are opening new naval passageways and new opportunities for trade,” and the Arctic could “become the 21st century’s Suez and Panama canals.” The melting of the Arctic isn’t just being ignored by the Administration, it is being celebrated.

The Trump Administration is also planning to move scientists and economists working on climate at the Department of Agriculture and U.S. Geological Survey out of the D.C. area with almost no notice to those affected. This physically removes the agency’s expertise from the political decisions being made in Washington, and also makes it harder for Congress to call upon that expertise if they want to examine an agency’s decisions. That makes both Congress and the agency more likely to rely on industry lobbyists and scientists conveniently located in and around D.C. Most importantly, it is causing many career staff to quit in advance, because they have built a life in this area and don’t want to relocate their families on a moment’s notice to a distant location.

These programs punch above their weight. The most effective carbon capture technology on earth is still the tree, and USDA economic analysis isn’t limited to farming, but includes sustainable forestry, wetlands conservation in the prairie potholes region, methane releases from livestock and manure management, and ethanol fuel mixtures that contribute to CO2 emissions, so changing even a few numbers in the economic analysis or leaving them out of the policymaking process can easily multiply the climate externalities of USDA policymaking.

The world is trying to address climate change, but it won’t work if the U.S. is pulling the opposite direction. That is why we are here. Dedicated public servants still staff the agencies of the United States, and despite their political masters, they are doing what they can to enforce America’s environmental laws and protect its resources. When they are targeted because of that good work, PEER steps up, providing the high level of service they could spend tens of thousands on from private counsel at no cost.

By supporting PEER, you are directly supporting the work being done by public servants in federal, state, and local governments who track the causes and effects of climate change, stop the polluters and check the deniers. If you can’t afford a donation, sharing our stories and those of our clients or following us on Facebook, Instagram, or Twitter to get the word out does more than you might think to help pressure the agencies to respect the integrity of the scientific method.