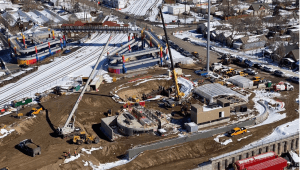 Air pollution in Commerce City is made even worse by the expansion of Interstate 70 that broke ground in 2018. The $1.2 billion project will widen the highway from 6 lanes to 8 lanes, and includes plans to lower a 1,000 ft stretch of the highway between the neighborhoods of Globeville and Elyria-Swansea, which will be covered by a greened two-block overpass that is being pitched to the community as a park. The Globeville and Elyria-Swansea neighborhood is 83.3% Latino and 44.4% low-income, and is one of the most polluted zip codes in Colorado, according to stats from Earthjustice.  The construction project resulted in the removal of 56 homes and 17 businesses from the neighborhood, and residents are concerned about their children being exposed to pollution while playing in the overpass to be built over the 8-lane interstate highway. Community advocates have been pushing for the highway to be moved 4 miles north to line up with I-76 rather than continuing through these neighborhoods. State officials admitted that the I-70 would not have been permitted if the project were being built from scratch today due to community justice concerns.

This expansion was the subject of a 2017 lawsuit by Earthjustice that ended in settlement. One of the claims —among other things—is that CDOT used fuzzy math to get its modeling to pass the Environmental Protection Agency’s pollution standards.  The independent modeling by Earthjustice found that future emissions of PM2.5 from the I-70 Project are expected to cause more than a marginal violation of the 24-hour NAAQS for PM2.5. The DOT did not object to this interpretation in litigation. The state was given a copy of the modeling report and it is likely that this has contributed to the state’s reluctance to model for PM 2.5. Stationary sources located in proximity to the I-70 Project—like the Suncor Oil Refinery and Cherokee Power Plant—would definitely show NAAQS violations because the modeling analyses of those projects would necessarily have included the increased future emissions from the highway traffic.

Colorado Department of Transportation and the Federal Highway Administration are now proposing an expansion to Interstate 270 as well, which runs through Commerce City just northeast of Elyria-Swansea. CDOT had scheduled a virtual open house on the proposal to begin June 7, but that has since been postponed to an undetermined date later in the summer.

I-70 Expansion Air Modeling Report of PM2.5 Emissions | Filed in the U.S. District Court for the District of Colorado | March 8, 2018