COMMENTARY | PEER at Age 30 – Some Perspective

PEER at Age 30 – Some Perspective 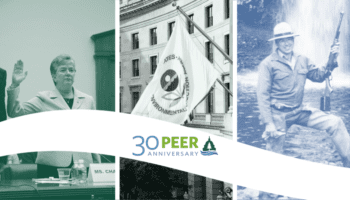 Three decades ago, Public Employees for Environmental Responsibility was born as a singular addition to the environmental movement. We were based on the somewhat novel idea that public servants could also be activists to advance their agencies’ mission when they fell short.

With a mercifully pronounceable acronym, the name PEER fit our mission, connoting the verb to look into, as a watchdog. As a noun, it suggested that agency staff were equals, not a lower life form, who deserve a seat at the decision-making table. We represent professionals to ensure that their expertise and experience can no longer be dismissed out-of-hand.

Back then, the contours of some of our core concerns were quite different. For example, whistleblowers in the early 1990s were still regarded by many as vaguely disturbing or disloyal individuals worthy of psychological examination. In the ensuing years, PEER represented scores of government whistleblowers – from the Chief of the U.S. Park Police to a backcountry Yellowstone ranger – across a wide array of high impact issues.

Today, whistleblowers are not only far more accepted but also, in many instances, expected and appreciated, with observers asking after a scandal undetected after many years burst into public view: “Why weren’t there any whistleblowers?”

Whistleblowers now serve as the participants, if not the precipitators, of many of our current controversies. And, over time, whistleblower laws have steadily become much stronger and offer far more remedies than in earlier decades.

Similarly, when PEER first started representing government scientists, scientific integrity, as such, was not even framed as an issue. It was broadly accepted that government agencies should control all the information arising from within. During the George W. Bush administration, at a public reception, I asked a deputy Interior secretary about numerous reports we had received of political appointees rewriting scientific documents. He openly admitted that these reports were true, as he saw his job as injecting “policy” considerations to “balance” the science. Besides, he added, “There is no rule against it.”

That was true then. However, the blatant attempts to manipulate and suppress environmental science under Bush, many of which were revealed by PEER, helped spark efforts to create and enforce standards of scientific integrity across the Executive Branch. The efforts under Obama allowed PEER scientist clients new outlets to ventilate integrity issues. While the Obama policies largely failed, the jaw-dropping Trump reign of “alternative facts” has reinvigorated efforts under Biden to make sure these abuses never happen again.

And, on the transparency front, in the early 90’s it was much more difficult to pry documents out of recalcitrant agencies. In those years, the Freedom of Information Act was unwieldy and expensive. PEER relied mainly on leaked documents, a practice that was both effective and underlined the case for reform of FOIA. Those subsequent reforms have made FOIA far more useful, especially when insiders enable us to pinpoint requests so that agencies have little room for evasion.

The use of FOIA has become so effective that many agencies now explicitly try to adopt practices that avoid creating paper trails, but in a government bureaucracy those tactics have little utility.

All these changes did not happen all at once but incrementally over time, often driven by a stream of new cases and incidents. While I am not suggesting that PEER was solely responsible for these evolutionary changes, I firmly believe that our robust efforts repeated energetically over thirty years played a substantial role.

Looking back, the central certainty for me is that the strategic niche filed by PEER as a service organization for scientists, lawyers, inspectors, and other public professionals has made a unique contribution to the protection of public health and the environment. While we have made progress, there is certainly a lot more work to do – work that could easily occupy PEER for another thirty years.

Jeff Ruch helped start PEER, serving as its first General Counsel, and for then 22 years as its Executive Director. He is currently PEER’s Pacific Director based in Oakland, California.