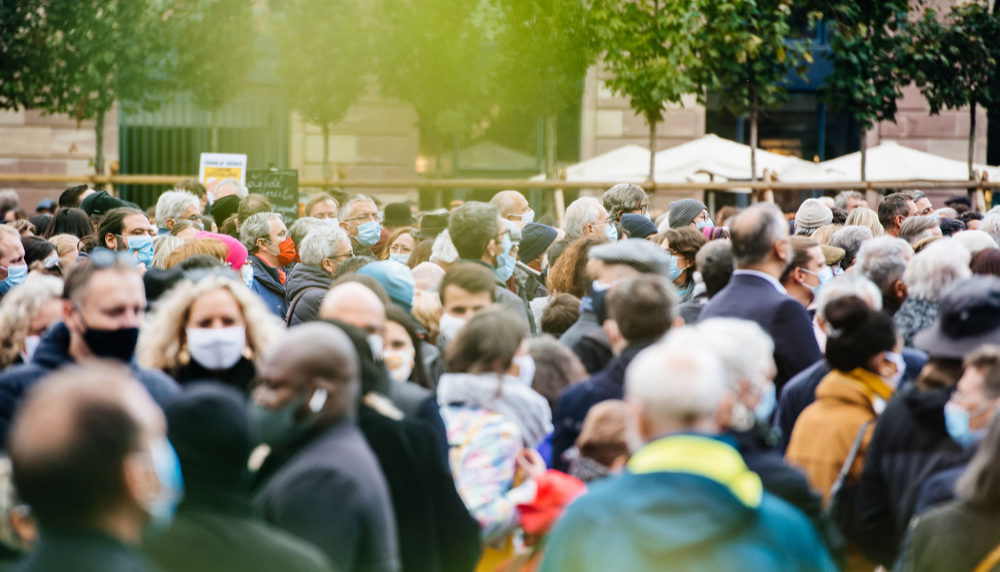 As the United States passes one million mortalities after more than two years of this horrid pandemic, we must learn lessons to avoid the next one. The most important beginning point is that Covid-19 is a zoonotic disease, that is, originally transmitted to humans via wild animals. Flowing from this are four discrete policy steps to reduce wildlife disease risks that we should take going forward.

The lab escape origin hypothesis for Covid was theoretically possible, but it always lacked factual support. The much stronger hypothesis now is that the pandemic resulted from bats infecting intermediate host animals and then humans came into contact with those animals, eventually in the City of Wuhan’s Huanan Seafood Market. Strong evidence exists that the intermediate host may have been, as it was in the case of SARS in 2003, a wild animal like the Asian raccoon dog that was subject to sordid, inhumane, and unhygienic conditions. The wild animal sales stalls in the Huanan market were perfect pathogen factories. Covid also could have proliferated in the rural wildlife “farms” in the same areas as the bats, which also provide perfect pathogen factories.

Pathogens originating in bats, other mammals, and birds have caused repeated outbreaks in humans in recent years: SARS, MERS, West Nile virus, bird flu, Ebola, Zika virus, and others. These facts lead straight to policy step one: the U.S., China, and other nations must end the sale of live wild mammals and wild birds as food or pets in order to drastically reduce human exposures to them. Policy step two is that farming wild mammals and birds must be halted, as the farmed animals are a further concentrated route for pathogen exposures and are sources for the wildlife markets. Policy step three, which is needed to further effectuate steps one and two, is that international trade in live wild mammals and birds as food or pets must be halted. 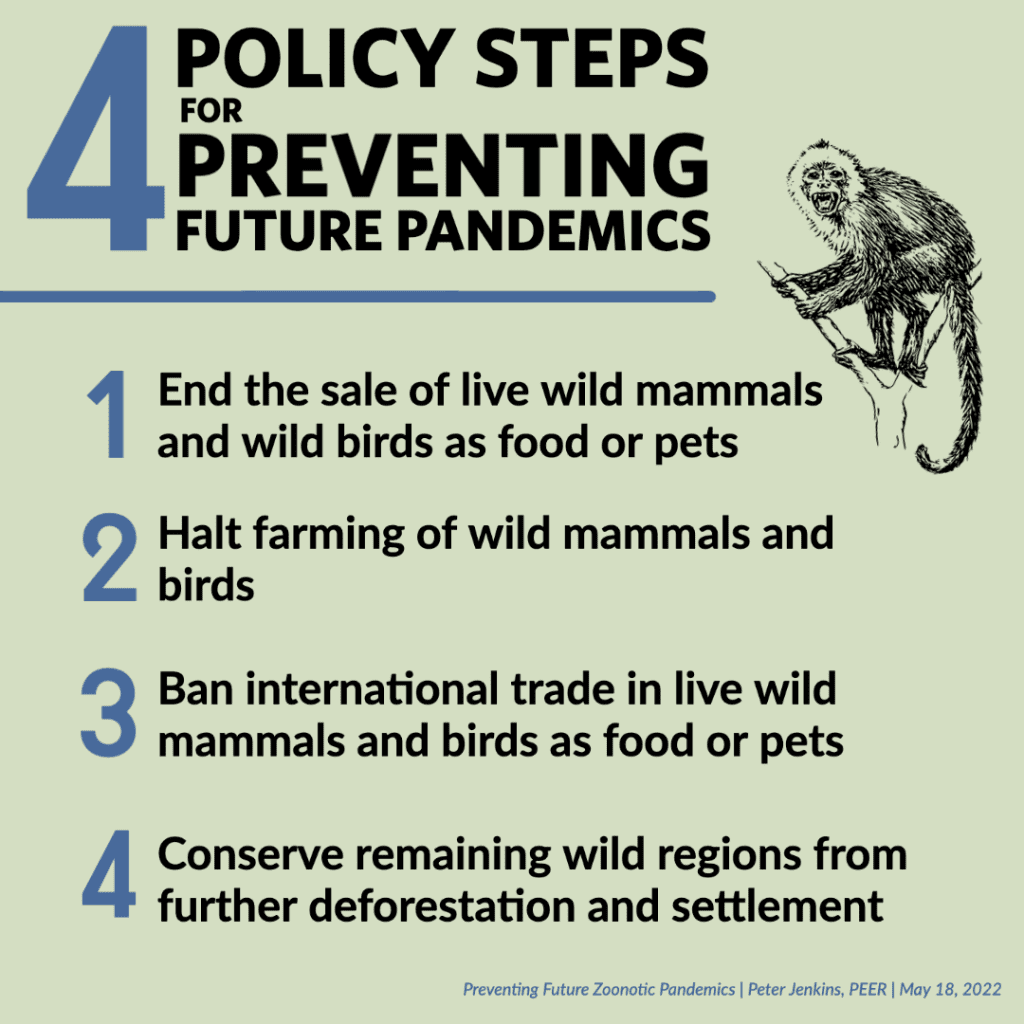 To accept the risks of further disasters of millions of deaths worldwide and repeated multi-trillion dollar blows to the global economy cannot be justified by any economic or cultural practice – it would amount to “zoonotic insanity”. Close the commercial wild animal sectors down.

However, in some remote places bushmeat markets provide an important part of local people’s diets. There, programs are needed to wean them from commercial bushmeat. The risk of uncovering a new pathogen comparable to devastating Ebola and HIV – which likely originated in bushmeat – are too high.

A research report called Broken Screens, which I led when I was at Defenders of Wildlife in 2007, covered the international wild animal trade. The report had cover photos of a caged civet cat plus of children wearing face masks because of the 2003 SARS outbreak – the precursor to Covid. Our chapter on zoonotic risks of the wildlife trade had prophetic warnings about possible future outbreaks. Many other warnings were in the popular and science literature. China had closed most live wildlife markets for a few years after SARS, but then precaution slipped and those markets were allowed to re-open. A paper by Chinese and other researchers in 2006 warned: “Chinese wet-markets [are] unique epicenters for transmission of potential viral pathogens”. Others described them as “a time bomb waiting to explode”. They exploded.

One of the sadder events in U.S. policy circles in the last two years was the villainizing by some politicians of the top-notch zoonotic disease research outfit, EcoHealth Alliance, for working with Chinese bat disease experts. But the whole aim of EcoHealth’s research was to aid predictions of the next likely outbreaks. If we want good predictions, we better have scientists like them digging around in the field and scanning the horizon for the next disease — or we will be sunk. Attacks on EcoHealth by fringe politician like Senator Rand Paul, blaming it for Covid when its experts were working to prevent pandemics, were vastly counterproductive. Rand Paul even attacked Dr. Anthony Fauci and indirectly blamed Covid on him because NIH had supported EcoHealth’s bat research in China, via a highly rated grant. That was ludicrous.

Zoonotics are rapidly increasing as a percentage of human diseases. We better have our ecology and policy figured out to avoid the next one. Yet, vital legislation, such as the Preventing Future Pandemics Act, which aims to block the next disaster by cracking down on the live animal trade and wild animal markets, has inexplicably languished in Congress for well more than a year. This delays the needed policy steps one through three, above. What could be more important than legislating stronger measures to prevent the next pandemic? Congress needs to pass and fund the programs now.

Policy step four, in the international arenas, is that nations must conserve remaining wild regions from further deforestation and human settlement. Thousands of new potential zoonotic pathogens lurk in remote regions. Increasing human exploitation there would be another recipe for disaster. One important step the United States can take to further this is to finally join the Convention on Biological Diversity (CBD), which aids conservation globally. Sadly, and remarkably, the U.S. is a pariah — the only nation on the planet that has not ratified the CBD. 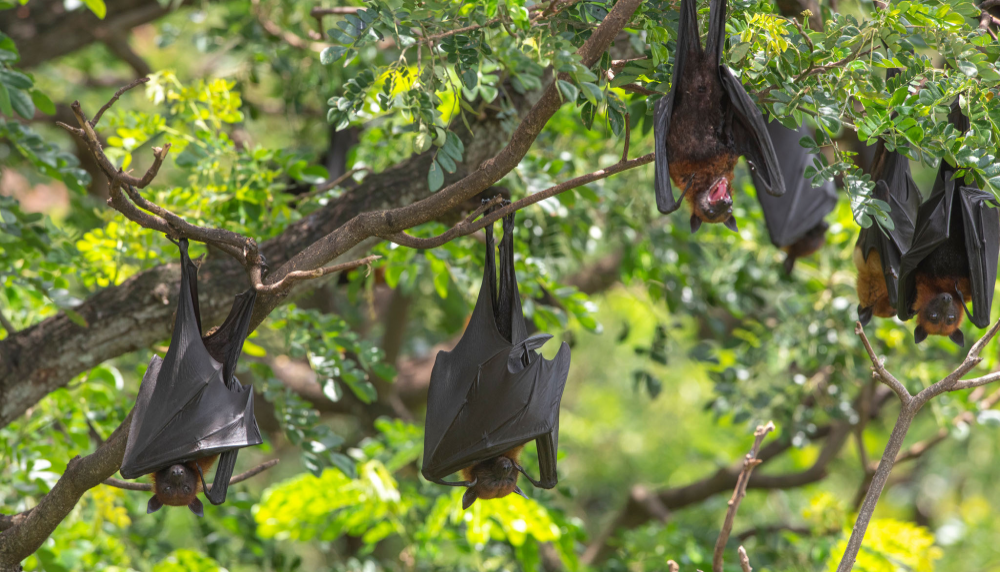 Finally, not to minimize the incredible human tragedy, but for perspective we should acknowledge that we have inflicted proportionally worse disease tragedies on wildlife populations. Two prominent examples: first, the chytrid fungus outbreak in amphibians, was spread by humans. The result: at least 501 species have declined in the last three decades due to chytrid, and 90 entire amphibian species are confirmed or believed to be extinct. The ironic second example is White Nose Syndrome, which has decimated bats since being introduced accidentally, likely by cavers, from Europe into New York State in 2003. It has killed over 90% of the northern long-eared, little brown, and tri-colored bat populations across North America since then.

So, let’s recognize that Homo sapiens has inflicted new diseases onto wild animals that are proportionally worse than what bats and other animals have done to us. We need vastly greater resources aimed at stopping future disease losses on both sides of the equation. We need to set the ecological scales right. In fact, ecohealth is just what we need.