COMMENTARY | Why This Mining Permit Should Fail

Why This Mining Permit Should Fail 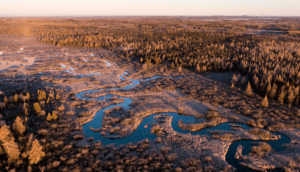 For most people, including PEER, the answer is an obvious yes. But things are never so simple.

That was one of the issues before the Supreme Court of Minnesota this week as environmental groups and the Fond du Lac Band of Lake Superior Chippewa argued that the Court should vacate a Clean Water Act permit issued by the Minnesota Pollution Control Agency (MPCA) to PolyMet Mining for a proposed open pit copper-sulfide mine in northern Minnesota. PolyMet’s mine would destroy thousands of acres of peatlands in the headwaters of the St. Louis River, the largest U.S. tributary to Lake Superior.

One of the many things wrong with this permit is that MPCA attempted to conceal comments from the EPA that made clear that PolyMet’s clean water permit was not in line with federal law. MPCA pressured EPA staff not to submit written comments in the official permitting record and had an EPA manager read the comments over the phone instead. Consequently, MPCA issued a permit without any written record of EPA’s concerns and destroyed emails showing that they had pressured EPA staff.

A trial court found all these facts true, relying on the testimony of PEER’s client. A Court of Appeals affirmed that the agency engaged in irregular procedures that violated Minnesota administrative law but ruled these violations did not warrant a reversal of the permit.

This summer, PEER filed an amicus brief in the Minnesota Supreme Court in this case. At issue before the Supreme Court is whether the flawed procedure merits reversal of the permit—or if the agency can get a pass because the procedural irregularity was not prejudicial enough to merit reversing the agency’s permitting decision.

If the Court of Appeals decision is allowed to stand, it will negatively impact the public and press by allowing an agency to keep information of public concern secret with complete impunity, and it will discourage whistleblowers from stepping forward to report wrongdoing.

The Supreme Court will likely take several more months to decide on the three issues the parties appealed in the case. In addition to the issues of irregular and unlawful procedures, the parties are also appealing the permit for violating both the Clean Water Act, for not protecting surface water from toxic pollution, and a Minnesota law that protects groundwater.