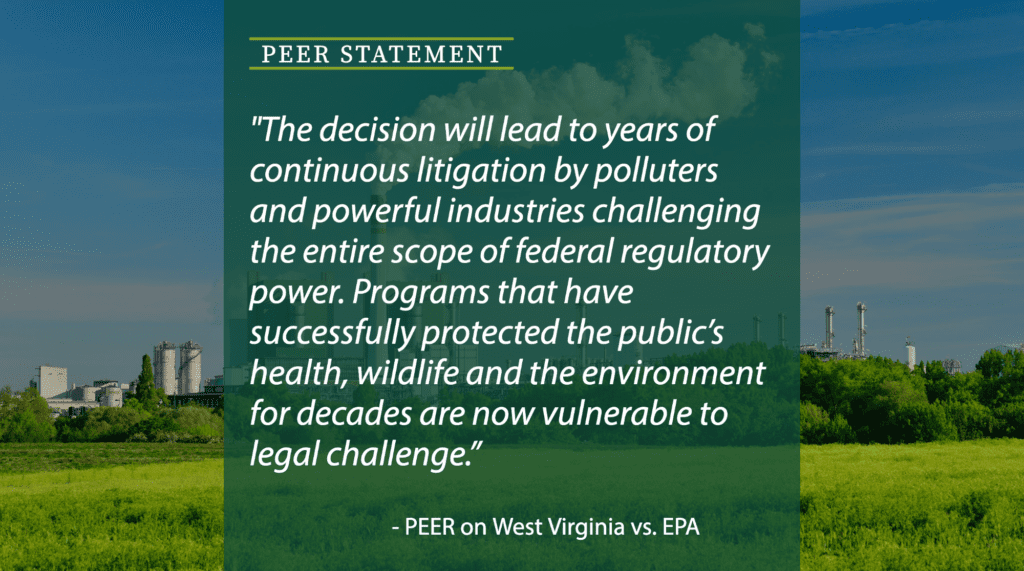 The Supreme Court issued a decision today in West Virginia v. Environmental Protection Agency that will hamstring the federal government’s ability to issue a wide range of regulations covering the environment, public health, climate change and the economy.

In a 6-3 decision, the Court held that the Clean Air Act’s grant of authority for EPA to implement the “best system of emission reductions” does not allow a nationwide system capping total carbon emissions to force a transition away from the use of fossil fuels. Its reasoning is, essentially, that the EPA cannot use this kind of system because it has never done it before. The court explicitly declined to determine what “system of emissions reductions” it would allow, leaving EPA, and every other agency in government, to guess what a reviewing court will or will not allow.

The ruling, in effect, smothers any attempt to use EPA’s existing statutory authorities to control carbon emissions or meaningfully slow climate change.

Instead of applying the Constitution, the Court relied on a relatively new conservative judicial theory called the “major questions doctrine.” The “major questions doctrine” holds that courts should not defer to agency statutory interpretations that concern questions of “vast economic or political significance.” However, in reality, this nebulous doctrine allows the judicial branch of government to usurp the power of the legislative and executive branches of government by allowing judges to insert themselves into any issue they find important economically or politically. It also further undermines 40 –years of precedent known as “Chevron Deference” which calls on judges to accept reasonable interpretations of a statute by an administrative agency.

While limited to EPA’s ability to set rules and regulations around greenhouse gas emission under the Clean Air Act, the decision will lead to years of continuous litigation by polluters and powerful industries challenging the entire scope of federal regulatory power. Programs that have successfully protected the public’s health, wildlife and the environment for decades are now vulnerable to legal challenge as nobody knows what is a “major question.” It’s a general anesthetic to dull the thinking of the administrative state and a prohibition on comprehensive responses to emerging threats.

The case is improper in every way. The Court took the case even though EPA has no plans to propose or issue a regulation on greenhouse gas emission until 2023. The plaintiffs in the case, twenty states led by West Virginia and coal companies, asked the court to preemptively prevent the Biden administration from reviving greenhouse gas emission regulations that had been shelved during the Trump administration. However, Article III section 2 of the Constitution says that federal courts can only decide “cases or controversies,” the single most important limit on judicial power. For plaintiffs to sue, they have to show they will suffer a real injury by something that the defendant—in this case, EPA – has done. By hearing this case, the Court has ignored this limit on its power in the Constitution, since EPA has issued no rule and the plaintiffs have suffered no injury.

This holding is the culmination of a fifty-year project by an extreme conservative legal movement to cripple the ability of federal agencies like the Environmental Protection Agency, the Food and Drug Administration, the Centers for Disease Control and Prevention and the Occupational Safety and Health Administration to do their work as Congress intended. This movement’s ideological and economic dogma is now our shared reality, and it is impossible to guess the consequences we will face as a result.