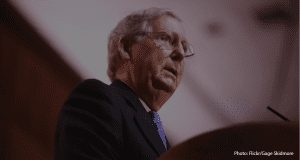 On March 23, Sen. Mitch McConnell took the Senate floor to excoriate opponents who were trying to amend the COVID-19 bill to include accountability and transparency measures, including an independent oversight board, and an elimination of a provision in the bill that allowed the federal government to “withhold the names of the companies that receive federal money and how much they get for up to six months”. Senator McConnell responded to these efforts in an irate fashion, “Are you kidding me? This is the moment to debate new regulations that have nothing whatsoever to do with this crisis?”

A glib response could note that Sen. McConnell was “absent” from coronavirus negotiations and was only in Washington that day after he succumbed to enormous pressure to cancel the Senate’s planned seven-day recess and only after he was able to enjoy an extended weekend in Kentucky to attend a political party.

However, a more serious analysis would uncover a decade long history of undermining, attacking and defunding the public health infrastructure that every American is now relying on to help pull us through this pandemic nightmare. While he has been the Senate Republican Leader, Mitch McConnell has led efforts to cut $1.6 trillion in critical funding for CDC and NIH research.1

One area Sen. McConnell has been particularly focused on cutting has been CDC’s Prevention & Public Health Fund. According to its 2016 funding report, one of PPHF’s critical missions was to allow the “CDC to support states in strengthening their ability to detect and respond to infectious disease and other public health threats, including increasing the use of electronic laboratory reporting and improving their information technology infrastructure through the Epidemiology and Laboratory Capacity (ELC) program.”

In 2017, as part of his efforts to repeal the Affordable Care Act, Sen. McConnell voted 2 to completely eliminate the PPHF even after the CDC warned, “losing this funding would cripple officials’ ability to detect, prevent and respond to health threats including pandemic flu.”

When that repeal bill failed, Sen. McConnell passed $750 million in cuts to PPHF as part of the Trump tax cut bill in order to cover costs from lost revenue. Think about that: in order to pay for giant tax cuts for corporations, Sen. McConnell decimated the CDC’s fund to preemptively stop pandemic viruses like COVID-19.

While criticism of President Trump’s handling of the coronavirus outbreak is well deserved, it’s Sen. McConnell who has a decade long history of leading the effort to gut public health funding. And now, as our public health services are begging for resources to save lives, Americans are living the policy result of Sen. McConnell’s efforts.

At the time of this writing, the bailout bill has, thankfully, been amended to include more oversight and transparency measures-as well as $130 billion for hospitals and medical services. As civil servants, from EMS responders and doctors to those processing unemployment claims, step up and put themselves at-risk to protect and serve our communities and our nation, it’s time that elected officials like Sen. McConnell start taking heed of what true public service is and what self-sacrifice is. And it’s well past time for Mitch McConnell and others to stop defunding our public health service and denigrating the civil servants who are working to protect our lives and find a cure.