Tweet and Video Violate Ban on Propaganda and Grassroots Lobbying

The one minute and 20 second video, entitled “Historic Request,” was sent to PEER and other conservation groups, touting the Great American Outdoors Act which just passed the Senate on a 73-25 vote and contains clips of Senators praising the bill sponsored by Senator Cory Gardner (R-CO).  The bill would fund purchases of public land and deferred maintenance for national parks, refuges, and other  lands. The accompanying tweet from Secretary Bernhardt reads:

They were distributed in breathless but official email from Jeffrey Small, Special Advisor to the Secretary, which read:

“Today, Department of the Interior Secretary David Bernhardt also released another awesome new video. Please retweet and share the Secretary’s video and post if you can.”

The ban on indirect or grassroots lobbying prohibits precisely what Bernhardt and his staff did, urging the House to pass the bill.  The language is contained in the appropriations law funding federal operations each fiscal year, including the current one. This prohibition reads:

“No part of any funds appropriated in this or any other Act shall be used by an agency of the executive branch, other than for normal and recognized executive-legislative relationships, for publicity or propaganda purposes, and for the preparation, distribution or use of any kit, pamphlet, booklet, publication, radio, television, or film presentation designed to support or defeat legislation pending before the Congress, except in presentation to the Congress itself.” (Emphasis added)
It is further outlawed in the federal penal code and treated as a violation of the Anti-Deficiency Act, carrying a civil fine of between $10,000 and $100,000 for “for each such expenditure.”

“Public lands do not benefit from David Bernhardt’s illegal cheerleading,” stated PEER Executive Director Tim Whitehouse, wondering how many other “awesome” videos Bernhardt’s shop has produced with taxpayer money.  “David Bernhardt should be fined in an amount to reimburse the American taxpayer for this video and all other illegal acts he has committed.” 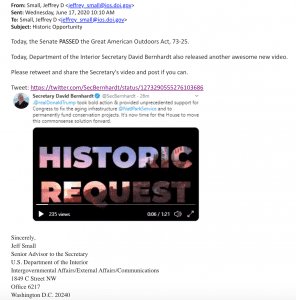