Washington, DC — A court-ordered removal of illegal levels of hazardous chemicals in Malibu public schools that should have been completed by the end of this month drags on with no fixed end date. Despite promises to the contrary, students and teachers still occupy school facilities contaminated with toxic polychlorinated biphenyls (PCBs) well above legal limits, according to documents posted by Public Employees for Environmental Responsibility (PEER) and America Unites for Kids.

In a lawsuit brought by the two groups, a federal court in 2016 ordered the Santa Monica-Malibu Unified School District to remove all PCBs from older buildings at Malibu High School and Juan Cabrillo Elementary School by the end of December 2019 (this month) or stop using the contaminated buildings. After the passage of a $195 million school bond, the District won a five-year extension on the grounds that it would use the bond monies to replace rather than remediate the contaminated buildings over five additional years. Meanwhile –

PCBs are classified as a probable carcinogen and are linked to lower IQ, interference with brain and body development, as well as neurological, endocrine and thyroid disruption, and thyroid cancer—which multiple teachers have reported.

“The District has spent far more taxpayer money fighting, dodging, and delaying the clean-up than actually performing it,” stated PEER General Counsel Paula Dinerstein, who is appearing today before the 9th Circuit Court of Appeals in a proceeding to speed up the PCB removal. “We are still in court because students and teachers remain in facilities that violate the Toxic Substances Control Act.” 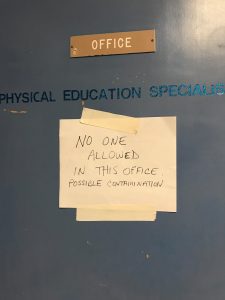