We Need a Radical Departure on Pesticides 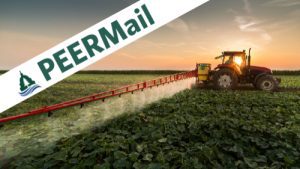 In many states, cities and towns can spray schools or town parks and athletic fields with toxic herbicides like 2,4-D, a component of the infamous defoliant Agent Orange that is linked with liver and nerve damage. In agricultural areas, large-scale spraying of the highly toxic organophosphate group of pesticides may take place adjacent to homes and daycares, while farmworkers can be exposed both at work and at home. And now PEER has brought new evidence to light indicating that many pesticides may contain toxic per- and polyfluoroalkyl substances, or PFAS, known as “forever chemicals” because they do not break down under natural conditions.

FIFRA, the federal law that provides for federal regulation of pesticide distribution, sale, and use, has proven to be utterly inadequate. It is based on a flimsy system of registration and labeling that gives too much power to the chemical companies.

Radical changes are needed to protect human and animal health, biodiversity, and our climate.

That is why we layout in a far-reaching program of legislative and policy changes to pesticide regulations in our new paper, Beyond 2020: A Vision for Pesticide Policies that Protect the Environment and Public Health, and call for an overall shift from pesticide dependence to healthy, organic and regenerative agriculture and land use practices.

In the coming years, we will be fighting to make this vision a reality.  We hope you will join us in this effort. Let us know what ideas you have for lessening our dependence on toxic pesticides, and please consider an end of year donation to PEER.

The former Superintendent of Big Cypress National Preserve in Florida is speaking out against a plan to expand off-road vehicle access in the preserve by adding more than 200 miles of off-road vehicle (ORV) trails, allowing motorized access deep into its wild, swampy terrain. John Donahue, who was Superintendent from 2000 to 2003, says the plan is fundamentally flawed and displays a broken planning process. PEER Executive Director Tim Whitehouse said in response, “As John Donahue so effectively describes, the current Park Service hierarchy has lost the conservation ethic which is supposed to be its guide-star.” read more »

A PEER investigation, as reported by the Boston Globe, has found that Anvil 10+10, the pesticide used in the aerial spraying programs of Massachusetts, parts of Florida, New York, and many other states, contains PFAS. When PEER alerted the Massachusetts Department of Environmental Protection (MADEP) of its findings, MADEP independently tested Anvil 10+10 and also found PFAS in the pesticide. At a time when many states and towns are paying exorbitant sums to filter PFAS out of their drinking water, they are also unwittingly dousing their communities with PFAS from the air. PEER is calling on states and communities to stop using pesticides that contain PFAS. read more »

A record large air evacuation of seriously ill endangered sea turtles from Massachusetts to the Gulf of Mexico points to a gaping hole in the federal conservation safety net. Hundreds of cold-stunned Kemp’s ridley sea turtles, the planet’s most critically endangered, are having to depend on private aid as National Park Service & NOAA shrink sea turtle recovery capacity as needs spikes, according to PEER, which has called on the National Park Service not to implement cutbacks to its world-renowned sea turtle recovery program at Padre Island, Texas. read more »

Last week, Florida Department of Law Enforcement agents raided the home of COVID whistleblower Rebekah Jones and confiscated her computer and other electronic equipment, including her phone. This raid has all the earn marks of a heavy-handed response designed to discredit a fearless critic and send a message to those working with her.  PEER has released a statement in support of Ms. Jones, who has exposed abuses of power and government wrongdoing to save lives and make government more accountable to the people. read more »