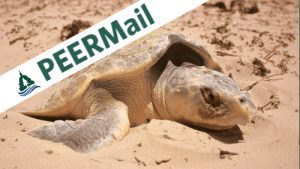 Kemp’s ridley sea turtles are the rarest sea turtles in the world. After decades of work, these turtles have fought their way back from the brink of extinction with the help of the internationally recognized Turtle Science and Recovery Program based at Padre Island National Seashore. The program also helps rescue loggerhead and green sea turtles. Now the population is being threatened by a 30% cut in program funding ordered by the superintendent.

We have organized a petition to tell the U.S. Department of the Interior to keep funding this lifesaving program. Over 2,000 people have already signed it. We hope you will take a moment to sign it too.

The Director of the Sea Turtle Science and Recovery Program is Dr. Donna Shaver, one of the world’s leading sea turtle experts, who has authored more than 100 articles in peer-reviewed journals. Among her many awards and honors, this year she is a finalist for the Samuel J. Heyman Service to America Medals, the first National Park Service finalist since 2008.

PEER has submitted a data quality complaint to the National Park Service on our behalf and on behalf of Dr. Shaver, outlining serious deficiencies in the documents used to support these cuts.

The cost of this program is minimal, and the benefits immense. Scientists now say we are living through a mass extinction of life on earth. We must do everything to support programs like the Sea Turtle Science Recovery Program and scientists like Dr. Shaver.

Thank you for your support of this program.

PEER has posted newly discovered documents from the University of Colorado-Boulder (CU) revealing a misguided campaign by a group of bookkeepers to fire the world-renowned climate scientist, Dr. Detlev Helmig. The revelation in these documents that there were, in fact, no “accounting violations” despite an intense pursuit by University insiders bolsters prospects for impending litigation in this case.

One year after an Interior Inspector General report slammed national parks for improperly allowing telecoms to install cell towers and other wireless facilities in violation of laws and policies, PEER has found the violations are continuing unabated. That is why we are asking the IG to audit the parks again and suing to force release of documents.

A new plan by the U.S. Fish and Wildlife Service (FWS) would allow state game agencies to kill approximately one in seven of the aquatic fish-eating birds known as Cormorants every year for the next five years. A year-round open season for shooting double-crested cormorants is the antithesis of science-based wildlife management, according to comments filed today by Public Employees for Environmental Responsibility (PEER).