Simi Valley, CA — The State of California has allowed the U.S. Department of Energy to dynamite two radioactive buildings without required dust control to prevent the spread of contamination and did so without notifying local authorities, according to a series of complaints filed today by Public Employees for Environmental Responsibility (PEER) and Parents Against Santa Susana Field Lab. The groups charge that it is one of a series of moves by the Newsom administration’s toxic agency to shirk its clean-up responsibilities for Santa Susana Field Laboratory, one of the most contaminated sites in the nation, located just 30 miles from downtown Los Angeles.

Santa Susana Field Lab is the site of a partial nuclear meltdown and numerous other radioactive and toxic chemical releases. Jointly operated by the Department of Energy (DOE), NASA, and Boeing, it houses a former nuclear reactor and rocket testing facility. Communities surrounding the site are plagued with cancer clusters and other adverse health conditions.

On October 1, 2021, without permits from local authorities, DOE dynamited two buildings classified by the U.S. Environmental Protection Agency as Class 1, for the highest probability of radiological contamination. The detonation produced plumes of uncontrolled dust, despite requirements for deployment of “water cannons to create a curtain to collect the dust.” 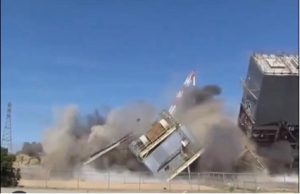 The groups today lodged a series of complaints concerning the apparent lack of permits required by the Ventura County fire and building departments, as well as with the Air Quality Control Board. In addition, the demolition took place in violation of the California Environmental Quality Act, and the groups are asking Governor Newsom to discipline the Department of Toxic Substances Control (DTSC) officials who greenlighted the detonations.

“This was an explosive blunder by DTSC in its bungled oversight in places like Santa Susana,” remarked Pacific PEER Director Jeff Ruch, pointing to the recent study showing the spread of radioactive ash from Santa Susana during the massive 2018 Woolsey Fire after DTSC said there was no release. “This incident exemplifies what has been a systematic abdication of the state’s duty to ensure a complete and competent clean-up of Santa Susana.”

The Santa Susana site has been under a 2007 legally binding agreement with DTSC requiring restoration of the site by 2017, yet the promised groundwater and soil clean-up has yet to begin. DTSC is now in closed-door negotiations to allow Boeing to escape its cleanup obligations.

“My daughter is one of many children in our community who have fought rare cancers. If the same DTSC that just allowed DOE to blow up contaminated buildings goes ahead and cuts a deal with Boeing to walk away from most of its contamination, the community would be furious. The Governor is capable of bringing the DTSC back to its fundamental responsibility of protecting people instead of polluters,” stated Parents Against SSFL Founder Melissa Bumstead. “Until Santa Susana is fully restored – as has been long promised – our children will be at risk of exposure to chemical and radioactive contamination.”

Watch the DOE video of the sodium pump buildings’ demolition