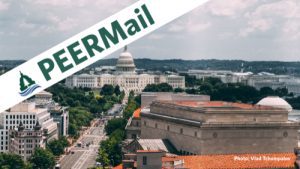 The next few months will be momentous. No matter the election’s outcome, we know this administration will continue to impose its will on the American people right up to the moment it leaves office. And these actions could have profound effects on government workers for years to come if they are not stopped. We’ve got a rocky road in front of us no matter what the outcome.

With the news cycle dominated by the pandemic, election politics, and Supreme Court antics, it is easy to miss that things are just as crazy behind the scenes.

Take, for example, one of President Trump’s last acts before the elections. On October 23, Trump signed an executive order that threatens to gut a century-and-a-half of civil service reforms. The President’s order creates a new “Schedule F” within the civil service, which gives political appointees the ability to easily hire and fire civil servants in policy-determining, policy-making and policy-advocating positions.

The President’s “Schedule F” order – which is most likely illegal — is just the latest example of our political system spinning out of control. If we want to protect Americans and preserve our democracy, we must excise the infection of politics in our public service and support non-partisan experts in government.

Only then will we be able to properly confront this pandemic and take seriously the environmental and public health challenges we face. Together, we will work to make that happen.

More Radiation Coming to You

PEER has posted comments opposing the Nuclear Regulatory Commission’s effort to allow commercial nuclear reactors to dump virtually all their radioactive waste, except spent fuel, in local landfills designed for household trash, not rad-waste. NRC’s definition would allow public exposure to the equivalent to more than 900 chest X-rays over a lifetime. It would create a cancer risk twenty times higher than the Environmental Protection Agency’s acceptable risk range and thousands of times the risk goal for Superfund sites. read more »

After months of state inaction, PEER is asking the U.S. EPA to take immediate action to stop the chronic dumping of sewage into Sakonnet Harbor, Rhode Island. Sakonnet Harbor is classified as safe for shellfish harvesting, fishing and water recreation. Although direct discharges of sewage into the Harbor are prohibited by law, citizens report that sewage dumping from a number of sources may be a regular occurrence. “The pandemic should be cause for heightened public health vigilance, not an excuse for official slacking,” stated PEER’s Science Director and New England Director, Kyla Bennett. read more »

PEER has posted laboratory results of PFAS chemicals in drinking water that we obtained through a public information request from the city of Delray Beach, Florida. These results show contamination levels that exceed safety limits in several states. Testing also reveals high levels of PFAS in the city’s reclaimed water and biosolids used for fertilizer and is similar to PEER’s own test results. PFAS (per- and polyfluoroalkyl substances) are a family of chemicals directly linked to cancers, liver and thyroid diseases, among other ailments. “While it may still be legal in Florida to drink water laced with PFAS, it is definitely not a good idea,” says PEER Florida Director Jerry Phillips. read more »