On October 23, in one of his last acts before the 2020 Presidential Elections, President Trump signed an executive order that threatens to gut a century-and-a-half of civil service reforms. The President’s order creates a new “Schedule F” within the civil service, which gives political appointees the ability to easily hire and fire civil servants in policy-determining, policy-making and policy-advocating positions.

According to CNN, independent analysts warned “the order would allow the President to fill the federal workforce with his cronies and reverts the country back to a spoils systems.” 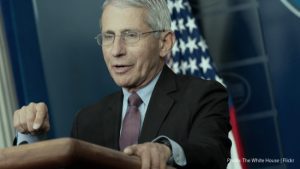 This deeply troubling move advances efforts by the administration to politicize policymaking by removing scientists and experts and inserting, instead, those who will follow the wishes of political leaders. Indeed, Congressional leaders are warning that this move is a precursor to President Trump’s attempt “to push out the nation’s top infectious disease expert Dr. Anthony Fauci, whom he’s been critical of during the coronavirus pandemic.”

However, this executive order would do much more than allow the removal of top civil servants like Dr. Fauci. It would allow political leaders to reach deep into federal agencies to remove and replace unknown and unheralded civil servants whose work is critical to keeping our country safe but which may run afoul of the prevailing political narrative of the day.

It should go without saying that without dedicated experts and public servants like Dr. Fauci, this nation would be in even more dire straits than we currently are. As federal and global health experts are warning of a daunting winter of COVID-19, President Trump and his political operatives are, again, downplaying COVID-19 – asserting a turn of the corner of the disease even as it spreads from the President to the senior levels of the executive branch, including the Vice President’s body man, senior political advisor and chief of staff. Without independent experts like Dr. Fauci and those dedicated civil servants working throughout the federal government, we might be marching off a COVID cliff simply to appease President Trump’s fragile ego.

The subversion of public servants and science does not stop with COVID-19, unfortunately. One of the most trying sectors of our government right now is the environment. Under the Trump Administration, the lobbyists for some of the world’s biggest polluters have been tapped to lead the EPA, Department of Interior and Energy, among others. This has led to massive leasing of  America’s public lands to oil and gas companies, the burying and erasure of dozens of critical climate reports, and the reversal of decades of protections for America’s health and public lands. Even under this duress, public servants working on these issues have continued to persevere and bring to the public the danger the political-based environmental rollbacks are having on American families and the environment.

The subversion of the needs of the American people is also even evident in the failed COVID relief bill that has been sidetracked, time-and-again, by political operatives that are more intent on protecting the President’s political agenda than American families.

Even as the economic recovery falters and COVID spikes across the country, efforts to pass a compromise COVID relief bill have hit roadblock after roadblock since the House passed the HEROES Act on May 15. In a last ditch effort to give relief and protection to the American people before the Election, Speaker Pelosi and Treasury Sec. Mnuchin have spent weeks attempting to hammer out a compromise. Unfortunately, these negotiations have been undermined by constant sabotage attempts by Republican Senate Leader Mitch McConnell and chaotic and contradictory directions from Trump himself.

The result is the American people are left abandoned by their government. Healthcare and frontline workers are facing even more risks than in the spring, as the medical supply chain begins to break and hospitals across the country begin to ration care. Advocates for PPE and science-backed approaches to tackling the virus, including Dr. Fauci, are facing attacks by President Trump and his senior advisors. And a White House that, on the last Sunday of October, admitted to giving up any effort to control the disease while accusing doctors of inflating the death count in order to make more money. All this, during the last full week before Election Day, as Americans face down the highest daily infections since the COVID pandemic began.

So we are left with this sober bottom line – Americans are dying and our nation’s toxic politics is killing them. The President’s executive order creating a new Schedule F is just the latest example of this. If we actually seek to protect Americans, preserve democracy and restore our nation as a global leader, we must excise the infection of politics into our public service that is crowding out experts and facts. Only then will this nation be able to confront one of the world’s deadliest viruses with scientific resolve.