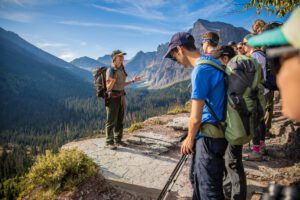 This week, President Biden signed the Inflation Reduction Act of 2022 (“IRA”) into law. This multi-faceted piece of legislation addresses climate change and environmental agency funding among other pressing economic issues. One small but important provision in the legislation calls for the National Park Service (“NPS” or “the Park Service”) to hire 5,000 more employees over the next ten years and provides $500 million towards staffing current vacancies and adding new positions.

This much-needed infusion of funds comes at a time when the Park Service is facing increased pressures. Overcrowding is a serious issue in most national parks. Park visitation rebounded following the 2020 pandemic when many parks were closed. In 2021, the forty-four most popular parks set attendance records. For example, Zion National Park had 5,039,835 visitors in 2021, breaking its previous attendance record of 4,504,812 from 2017.

The resurgence of the National Park System’s popularity has resulted in an overextension of the agency’s limited resources and risks to public safety. For example, there has been explosive growth in park search and rescue operations. NPS recorded 3,371 such incidents in 2021, more than triple the 1,103 incidents recorded in 2015. In addition, NPS submissions to the Justice Department’s Uniform Crime Reports reflect a four-fold rise in serious crime and a one-third rise in robberies since 2014. In some instances, crimes were targeted toward park rangers. NPS recorded 228 threats and assaults on NPS law enforcement personnel in 2019, more than doubling the ninety-four such incidents in just the year before.

Despite record levels of visitation, increasing search and rescue operations, and rising crime, the number of rangers in our national parks has significantly declined. Rangers are charged with a variety of essential tasks, ranging from park interpretation to search and rescue operations to maintaining law and order and protecting persons and property. Since 2005, the ranks of permanent law enforcement rangers have fallen by 15 percent, while the number of seasonal law enforcement rangers deployed during peak seasons has dropped by 30 percent. The decline in ranger staff violates the 2002 NPS policy of “no net loss” in law enforcement ranger staffing levels.

All of these pressures are expected to increase in the coming years, and to ensure the agency does not reach its breaking point, it is essential that NPS leadership alleviate the burden on its over-worked employees and support increased resources and capacity. The IRA’s mandate to invest in and increase NPS staffing is a step in the right direction, but there are many miles to go before the agency is course-corrected.

We will be advocating that NPS fills these positions as quickly as possible. Restaffing the Park Service does not have the luxury of a ten-year timeframe. The mercurial makeup of Congress and threat of residential turnover in the White House both endanger any piece of legislation with an extended deadline. While practically speaking, bringing 5,000 new employees to the NPS cannot occur overnight, it should not be unnecessarily delayed.