BLOG: Why Blow the Whistle? 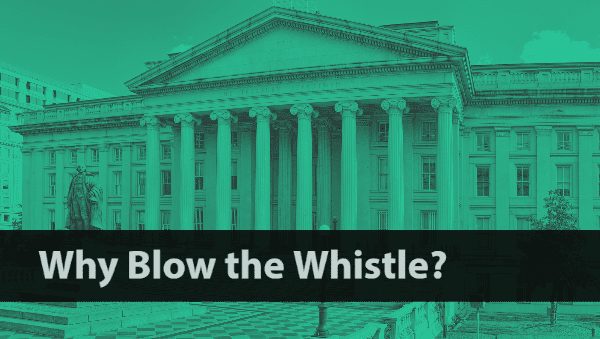 A friend of mine asked me a question this week that took me a while to answer in the depth it deserves: “What is even the point of whistleblowing when nothing ever comes of it . . . the people in charge . . . will do nothing so like why stick your neck out?” This sense of despair is understandable: high-profile whistleblowers are not known for their quality of life, and any reforms they spur take much longer to realize than the consequences of doing so. While I have seen agencies act positively in response to whistleblower complaints, and public attention at least makes the government act more cautiously, this perspective only comes from experience, and whistleblowers rarely get more than one shot.

So this was a harder question for me than I expected. There isn’t a uniform answer, and every whistleblower is unique. We don’t ask our clients why they do what they do, or try to dig into their reasons, unless they offer it to us themselves. I’m not convinced that many whistleblowers have a great understanding of why they choose to speak up. Many of my clients have told me that they don’t like the label, they don’t think of themselves as whistleblowers, and they only thought they were doing their jobs. Most people would not willingly subject themselves to what may be the full weight of the government. So why would they ever blow the whistle? Most of the time, civil servants don’t know that they blew the whistle until long after they’ve done it.

This week’s whistleblower retaliation complaint filed by Dr. Rick Bright with the U.S. Office of Special Counsel is a model example. Here was a good civil servant, a program leader at the Biomedical Advanced Research and Development Authority (BARDA), who thought that his agency should be responding to the coronavirus pandemic using the best available science and with clear vision about critical supply shortages that his agency was in a position to address. By raising what he thought were significant concerns through official channels and normal means he found himself disinvited from meetings he was listed as an official participant in, removed from positions of authority, and ultimately removed from BARDA. What was the administration’s last straw? Suggesting to his colleagues that hydroxychloroquine, an anti-malaria drug hyped by the President as a miracle panacea for the virus which caused dozens of deaths and injuries and did nothing to counteract the virus, should be fully evaluated before the government endorsed it. Most people in Dr. Bright’s situation would not think this was “whistleblowing,” but just doing your job to protect Americans.

The agency’s retribution charted a predictable course, one I have seen many times in my short career in whistleblower defense: shoot the messenger. The Department of Health and Human Services (HHS), issued a rare public statement concerning a personnel matter: they were “deeply disappointed that he has not shown up to work on behalf of the American people and lead on this critical endeavor.” Of course, the reason for his alleged absence was the agency’s own attacks against him in the office, leading to a hypertension diagnosis and advice from his doctor to avoid the workplace.

Many of PEER’s clients suffer similar attacks. In the office their reputation is shredded by whisper campaigns, personal attacks designed to undermine their character and reputation, gaslighting, and microscopic scrutiny of every memo, email, and timecard they ever wrote over decades of public service for the barest excuse to retaliate against them officially. Whistleblowers know that once the system has decided to remove them, it is only a matter of time before the agency finds the broken taillight or rolling stop to justify shocking cruelty against whistleblowers.

Dr. Bright may not have thought of himself as a whistleblower before his attorneys explained to him the way that the whistleblower protection laws work. Congress saw decades ago that many of the most unjust punishments faced by civil servants were doled out not for leaking to the press, but for simply asking their superiors whether they had a bad idea, one that needed to be adjusted to comply with law or regulation, that might be dangerous, or that would just be a waste of resources. Civil servants accustomed to a rational government which bases its decisions on the best available information will naturally assume that expertise and information is valued, not spurned. They speak up not to undermine the government, but to make sure that it functions lawfully and effectively. Speaking up may not even seem like a significant decision: it is what is expected of government employees whose expertise is valued by their agencies, something they’ve done dozens of times before without even considering that it could be a risky decision. It is not uncommonly a terminal decision. In this context, “why blow the whistle?” is a non sequitur, like asking why they would tell a friend not to drive home drunk from an after-work happy hour.

In some cases, however, the norm is “go with the flow; if you appease the boss you get good performance reviews and promotions, and best not to ask what happens otherwise.” Faced with this stark reality, even speaking up in official meetings when the agency isn’t following the law becomes fraught. You risk not just angering an entitled manager, but their entire chain of command all the way up to the President. That is the hard case. A whistleblower can see, like my friend (a former member of the armed services), that “the people in charge of punishing this behavior are all complicit and will do nothing so like why stick your neck out?” Speaking up can ruin your career, and by extension, your life.

This is not the most common path I have seen PEER’s clients take, but there is one commonality among civil servants who speak up when they know, or even suspect, the risk. They all reached a point when they thought “enough.” They reach the point where the daily outrage surpasses the personal risk, and may believe the public, once they learn how bad things have become, will be on their side. After the goalposts have been moved as far as they will go and every rationalization is exhausted, there is a point when a civil servant realizes that their oath of office to the people and the Constitution of the United States cannot endure their daily reality. There is a moment when they can no longer hear the note that their conscience plays to keep its instrument in tune, and they are compelled to make some sound to combat the deafening silence. I can think of no greater admiration, and it is my honor to defend them.

Kevin Bell is PEER’s staff counsel, defender of whistleblowers and lover of all things FOIA related.