Denver — A veteran, decorated Bureau of Land Management range specialist is in hot water for her efforts to end illegal cattle grazing in Colorado’s San Luis Valley, headwaters to the Rio Grande. Three weeks after she laid out the problems to BLM’s de facto Director, William Perry Pendley, and asked for his help, she was hit with a proposed two-week suspension, according to documents filed today by Public Employees for Environmental Responsibility (PEER).

For nearly 30 years, Melissa Shawcroft has been a BLM Range Management Specialist working in south-central Colorado’s San Luis Valley. Her primary duty is administering approximately 70 grazing allotments and 50 grazing permits, with a major goal of protecting the Rio Grande Natural Area from damage caused by livestock overgrazing.  Citing her work, in 2012, BLM gave her its Outstanding Rangeland Management Specialist Award.

On August 25th, Pendley appeared at BLM’s San Luis office where he spoke about, among other things, returning “accountability” to agency operations. Melissa Shawcroft reached out via email to Pendley, disclosing damage to ranchers from illegal grazing and BLM’s indifference:

“I am ‘speaking out’ to you on behalf of this rancher and other ranchers who are complaining about the lack of management and law enforcement in this office and I am speaking out for our public lands that are being destroyed and over grazed, as we speak, by the free grazing public. I have been reprimanded as a result of my reporting the below livestock trespass and the others that occur in the valley but I don’t do well in looking the other way when there is a wrong especially when the public is screaming at us to do something.”

Days later, on September 16th, her supervisor proposed to suspend her for two weeks without pay for “discourteous conduct, insubordination, boisterous or disruptive/disorderly conduct” related to her efforts to curtail grazing trespass.  The deciding official is acting BLM Colorado Deputy Director Benjamin Gruber. Today, on her behalf, PEER submitted a refutation of the charges.

“Melissa Shawcroft is being punished for doing her job and trying to protect both the public range and law-abiding ranchers,” stated Rocky Mountain PEER Director Chandra Rosenthal, who is leading Shawcroft’s legal team. “After appealing directly to Mr. Pendley, Ms. Shawcroft is facing serious punishment while the illegal grazing continues unabated.”

The problem of illegal grazing has accelerated in recent years, according to Shawcroft’s reports based upon complaints from ranchers and her own personal inspections and photographs. The excessive illegal livestock is both hurting ranchers and destroying riparian areas.  Yet, BLM has refused her repeated requests for enforcement actions.

“Nothing is more basic to the BLM’s mission than protecting public resources in its charge from theft,” added Rosenthal. “Melissa Shawcroft’s case illustrates what is wrong with today’s BLM and what desperately needs to be fixed.”

Map of the area of trespass grazing 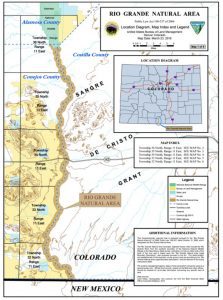