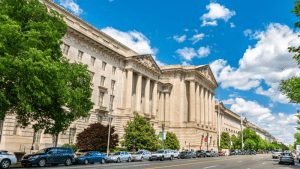 This is not true. In fact, the agency’s policy is mainly rhetorical without much practical impact. Consider that EPA’s scientific integrity program –

EPA’s policy was and remains so weak that the notorious Scott Pruitt, the Trump-appointed Administrator who roiled EPA for much of his short tenure, repeatedly voiced his support of EPA’s scientific integrity policy with absolute certainty that it would not inconvenience him in the slightest.

After lavishing praise on EPA’s scientific integrity policy and program, Administrator Regan’s memo goes on to indicate that perhaps EPA could be doing a much better job:

“[L]essons we’ve learned over the past 10 years will inform our work to update and strengthen our policy…We are working on several initiatives to enhance our culture of scientific integrity” such as “identifying ways to prevent inappropriate interference.”

The only fix Administration Regan offered in his memo was to have his Scientific Integrity Officer “report annually at an executive management council meeting to outline challenges and answer questions” and he invited the officer “to brief us on the Scientific Integrity Annual Report.” An annual briefing? Hardly strong medicine. 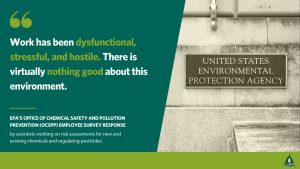 So, what does EPA’s scientific integrity policy mean inside the cubicles? One clue can be found in recent results of a “Climate Survey” within the branch conducting chemical risk assessments and regulating pesticides. This branch has generated considerable consternation concerning disclosures from EPA scientists that the chemical industry, through pliant managers, routinely have altered – and continue to alter – risk assessments to remove warnings needed to protect workers and consumers who come in contact with these chemicals.

This Climate Survey was an attempt to gauge how extensive those concerns from staff scientists are. The feedback EPA received was clear and so scathing that EPA decided not to share the responses with staff. Scientist answers were laced with blistering comments such as –

Yet, rather than be honest about the Climate Survey (whose results were obtained only through a threatened FOIA lawsuit), EPA management circulated a PowerPoint presentation featuring painfully clueless suggestions for “Going Forward”, such as “Mentor-mentee support”; “Develop checklists for useful information”; and instituting a “Coach for trust training series.”

Like the prison captain played by Strother Martin in the movie “Cool Hand Luke” who keeps explaining, “What we’ve got here is failure to communicate,” EPA mistakes blatant breakdowns in integrity with failures to communicate. The problem is not a failure to communicate but EPA’s unwillingness to recognize, let alone redress, repeated and engrained acts of managerial scientific misconduct that are endangering public health.

With the departure of Trump, conventional wisdom indicated that EPA would return to its role as a responsible regulator. That has not often been the case, particularly within EPA’s chemicals branch. This situation is unlikely to improve unless Biden appointees take off their rose-colored glasses to see what is really happening and take direct and decisive corrective actions to offer scientists real protections from retaliation by their managers.