COMMENTARY | What is Going On with Colorado Air Quality? 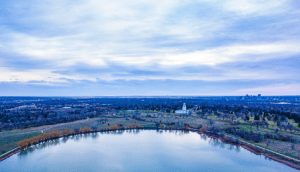 When you think of Colorado, you probably imagine clear blue skies and sunshine—that image doesn’t jibe with the air quality in much of the state.  Colorado’s urban air quality is ranked 43rd out of 50 states by the US News & World Report 2019 Best States report. The state’s entire Front Range remains in violation of the National Ambient Air Quality Standards (NAAQS) set by EPA and has been in noncompliance since 2012. In 2019, Governor Polis took the bold step of asking the EPA to downgrade the state’s ozone nonattainment status from “moderate” to “serious.”

Now, thanks to a group of dedicated whistleblowers from the Colorado Air Pollution Control Division, we have proof that the state has been undermining its own experts for years in favor of easing requirements for industry. The state has been issuing air permits that violate national clean air standards. Thanks to these revelations, Colorado has the ability to turn things around.

There was a boom in oil and gas drilling in Colorado in the mid 2000s, which coincided with the EPA setting new standards for NOx—pollutants that mainly come from the tailpipes of cars and fossil fuel production, and are responsible for the smog that exacerbates asthma and other respiratory ailments. The state, in an attempt to “streamline” the permitting process for this influx of new business and in the face of this new standard, decided to implement its own rule. This rule is called Memo 10-01 and sets a threshold for “de minimis” pollution. This rule lets the state rubber stamp the vast majority of permits industry applies for, authorizing permits for any facility that produces less than 40 tons per year (tpy) of NO2. Now, according to Reuters, Colorado ranks fifth among U.S. states in oil production, at about 500,000 barrels per day (bpd), up from just 90,000 barrels in 2010.

“De minimis pollution” is not an EPA-approved concept. Furthermore, this rule did not go through the proper notice and comment procedures required for rulemaking. PEER, the Center for Biological Diversity, and other groups put the state on notice in September 2020 that this practice did not meet the standards of the Clean Air Act. Next, we hired an outside, independent air expert to use the state’s own data and model the pollution from a real facility. In February 2021, we sent the modeling report to the state, proving with an example that a facility that emits less than 40 tpy can violate the NAAQS. We also shared a letter from EPA Region 3, which addressed a similar situation and required the state to “use all credible information available” and to perform complete modeling analyses to ensure that the permits do not violate the NAAQS.

On March 15th, 2021 the state decided to not only abandon the requirement for modeling for NOx, but also banned the air quality modeling staff from conducting any review of NAAQS compliance whatsoever for hourly emissions of NO2 and SO2, 3-hour standards for Sulfur Dioxide (SO2), and daily emission limits for particulate matter smaller than 2.5 micrometers (PM2.5).

The only two air modelers in the state, after years of being ignored by their supervisors, decided to “go public” and declare that they had protected whistleblower status. Another former air modeler joined them and, on their behalf, on March 30th, PEER filed a complaint with the EPA Office of Inspector General. The whistleblowers requested an investigation of the state’s violations of law, mismanagement and abuse of authority, and the state’s practice of prohibiting employees from conducting legally mandated modelling of air pollution.

By risking their livelihoods and reputations with these revelations, the employees drew media interest and public support. On April 2nd, a coalition of approximately 40 community groups wrote a letter to Colorado’s Attorney General asking for a criminal investigation into the APCD. Two more former employees from the Air Pollution Control Division came to PEER with more information.

In response to the serious allegations and the public response, on April 25th, the Colorado Attorney General committed to an independent investigation by a Special Assistant Attorney General. On May 7th, PEER petitioned the Attorney General to expand the scope of this investigation to include additional legal violations revealed by the whistleblowers. This included the serious charge that the state manipulated data when analyzing impacts of coal power plants for the EPA. The effect of this was to maintain the attainment designation of the town of Ft. Morgan, allowing SO2 pollution to continue.

On top of all of this, despite tremendous public opposition, and clear environmental injustice issues, the state is in the process of issuing an air permit to the Suncor oil refinery. This refinery is located just north of Denver and is in one of the polluted and disadvantaged communities in the state. Even though this community deserves protection from decades of pollution, the state is arguing that it is not required to model for criteria pollutants (pollutants regulated by the EPA due to their potential to cause health problems in humans). The draft permit for the Suncor Refinery relies on Memo 10-01 as justification. Environmental groups hired an independent modeler, and for the third time, again using the state’s own data, proved that the facility is in violation of NAAQS.

Just two miles from the Suncor Refinery is the Cherokee power plant. When permitting this plant in 2011, not only did the state once again prohibit staff from modeling impacts, it did so in spite of the fact that the air experts had raised environmental justice considerations—flagging that this community has some of the worst air in Colorado. The staff was ignored and Cherokee is operating under a permit with no full analysis and polluting this same heavily impacted community.

On May 13th, PEER requested that EPA Administrator Michael Regan intervene in the face of the state permit agency’s continued ignoring of its own specialists. We are hopeful that the agency will step away from the decades of illegal air permitting and make a true effort to bring blue skies back to Colorado.