BLOG: Dark Waters and the Threat of PFAS Chemicals 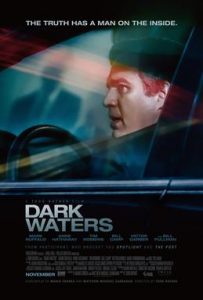 We aren’t usually in the movie promotion business, but we did want to tell you about the movie Dark Waters and how it relates to our work at PEER.

Dark Waters is a recently released movie based on a true story about a lawyer and a community who fought DuPont chemical company, eventually winning a class action lawsuit in 2017 for those injured by chemicals known as PFAS (per- and polyfluoroalkyl substances).

PFAS are man-made chemicals that are used in everything from plastics, to food packaging, dental floss, cookware and clothing. PFAS exposure is linked to severe health issues, including cancer, birth defects, liver and kidney damage, pregnancy complications, and other debilitating problems. These compounds are known as “forever chemicals” because they don’t break down; rather, they build up in the environment and in our bodies and are now found in the blood of more than 93% of people in the US.

How does this film relate to the work of PEER?

PFAS is also a story about how the U.S. Environmental Protection Agency is complicit in the chemical industry’s lies and misrepresentations, allowing people to be poisoned while corporations rake in billions of dollars selling their toxic products and dumping their waste without regulations.

And it is the story of those inside and outside of government who step forward and say this is wrong.

That is where groups like PEER come in. For years, we have been immersed in exposing the PFAS scandal after current and former public employees approached us with information about government efforts to slow walk responses to this emerging toxic crisis.

The manufacturers of these chemicals have known their dangers for decades, and they have done everything in their power to stop any regulation of their toxic products. Meanwhile, the clean up costs will be staggering and borne by average Americans.

This needs to change.

Dark Waters will be released December 5th. We hope that it will help spur action to hold polluters accountable and regulate all PFAS chemicals!