BLOG: EPA Should Sit Out Earth Day This Year 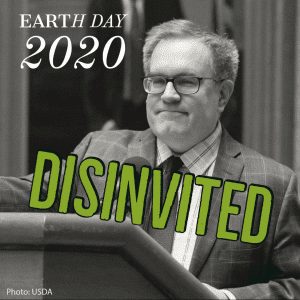 This April 22nd is the 50th Earth Day. While the U.S. Environmental Protection Agency has been a part of most every Earth Day celebration since the event was founded by Senator Gaylord Nelson of Wisconsin, it is fair to say that by its recent actions the agency’s current leadership has worn out its welcome – the EPA should sit out Earth Day.

The list of reasons could go on and on. Suffice it to say that we are seeing the biggest reversal of public health and environmental protection in our lifetime.

Nonetheless, EPA’s Office of Public Affairs is gearing up for self-congratulatory celebration on the 22nd. Without a doubt, historically, EPA has played a role in improving our environment but, by its actions in recent years, the agency’s leadership has forfeited any basis for public recognition in 2020.

By contrast, EPA’s career staff should be applauded, and many are casting profiles in courage midst the darkest days of their professional lives.

If you would like to join in disinviting the EPA Administrator and his inner circle from Earth Day 2020,