The COVID-19 crisis may have sent most of America into lockdown, but not the Interior Department, where the Trump administration practices no social or ethical distancing with the fossil fuel industry and other polluting friends.

As the virus sweeps the country, killing more than 100,000 Americans, sending unemployment to the levels of the Great Depression of the 1930s, and wiping out 600,000 clean energy jobs, the Washington Post reported that Interior’s Bureau of Land Management is slashing royalties paid by oil and gas companies operating on public lands by as much as 80 percent. The royalty program provided $3.2 billion last year to federal and state treasuries. 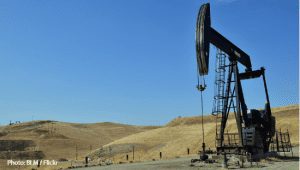 BLM said it provides the relief to “ensure America has a stable long-term energy supply and provide long-term value to American taxpayers.” But the program looks more like a short-term, short-sighted giveaway as one company enjoyed a royalty cut on one of its wells from 12.5 percent down to 5 percent, even though it had $70 million cash on hand in the last quarter.

As for the energy supply that actually would provide the most stable and long-term value to Americans for jobs, pollution and controlling climate change, that very same BLM has a very different policy. The Post and Reuters reported that the agency is slamming solar and wind projects operating on public lands with massive retroactive fees. The contrast couldn’t be starker between how it treats the renewable energy industry and its response to the oil and gas industry’s request for favors.

That is but one stark example of how Interior, being led by former oil and open pit mining lobbyist David Bernhardt, is abrogating its charge to conserve natural resources in general and resisting the desire of most Americans to shift as quickly as we can from drilling for carbon to harnessing the sun and stiff breezes. In the last few months, several media outlets and watchdog organizations have charted Interior’s labyrinth of corruption. A few lowlights include:

That is all on top of the bald coziness and access that industry has with its former representative. Slate reports that during last year’s federal shutdown, Bernhardt kept 800 staffers on the job to process oil and gas leases, 73 percent of which went to companies Bernhardt had ties to. That is on top of the Intercept’s reporting on appointments of top Interior officials whose primary qualifications are simply being right-wing ideologues for gun rights and against endangered species laws.

Fortunately, for all of the pillaging of public lands that the Trump administration has attempted, first through former Interior Secretary Ryan Zinke and now Bernhardt, many proposed changes are still in process and conscientious employees within the Department continue to work with groups like PEER to expose wrongdoing. There remains plenty of opportunity to lock in on the corruption of Interior before it locks the public out of public lands. There is time to get out a shovel to dig up these political weeds before they take permanent root.

Tim Whitehouse is the Executive Director of PEER. Included in his long career of working on a wide range of environmental issues is 10 years as a senior attorney at the United States Environmental Protection Agency.